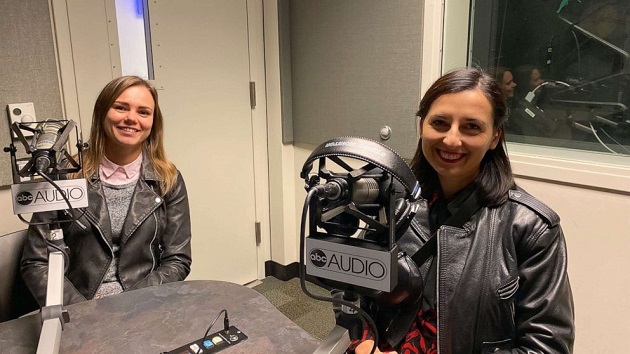 Kaitlyn Folmer(NEW YORK) — Ukrainian investigative reporters Anna Babinets and Nastya Stanko spoke to ABC News in the latest episode of the podcast “The Investigation” about their shared fear and frustration in reporting from their home country and a distrust of President Donald Trump. “The Investigation” co-hosts Chris Vlasto and John Santucci interviewed the two journalists who are recipients of the 2019 International Women’s Media Foundation (IWMF) Courage in Journalism award.Babinets, 35, a reporter for Ukrainian investigative non-profit Slidstvo and Stanko, 33, a reporter for independent media channel Hromadske were both recently honored at receptions in Washington, D.C., Los Angeles and New York City.When asked to reflect upon receiving the prestigious IWMF’s Courage in Journalism award, Babinets said with a slight pause and a gentle laugh, “We suspect that this is because we are brave.”Babinets, whose reporting has focused on big crime and corruption in Ukraine, told ABC News that she has been threatened and that her life has been put at risk for her reporting. Stanko, meanwhile, was held hostage for three days by a Russian-controlled self-proclaimed “Luhansk People’s Republic” while reporting on the front lines of Eastern Ukraine.Babinets recalled that seven years ago, she began investigating a newly established natural gas company called Bursima while former President Viktor Yanukovich was in power.”Yes it was more risky,” Babinets said. “Some people from President [Yanukovich’s] administration told us, ‘Stop doing this, don’t work on it.’”Burisma would later become a household name in the United States when news broke in September about a phone call between Trump and the newly elected Ukrainian president, Volodymyr Zelenskiy. In a rough transcript released by the White House, Trump asks Zelenskiy to launch an investigation into former Vice President Joe Biden and his son Hunter Biden’s work for Burisma. Zelenskiy is quoted as saying, “The next prosecutor general will be 100% my person, my candidate… He or she will look into the situation, specifically to the company that you mentioned in this issue.”Babinets told ABC News that she was shocked when she read the official White House readout.”Maybe anyone didn’t notice when Ukrainian President Zelenskiy said that very soon he will have his own general prosecutor who will be controlled totally by him… That is not how it should work, because the president and the general prosecutor are two independent person[s]. Presidents can’t [totally] control general prosecutor[s]. So it was, for me, it was a red flag, because it means that everything is the same when [the] president tries to control general prosecutors, which means that we will not get real investigations against big politicians — top corrupted people,” she said.When asked about the military aid that was withheld by Trump, Stanko called the aid “very important” and added that “nobody believe[s] Putin, even if we have some peace.””If we will have this military aid from [the] U.S., we will have this…protection and feel OK if everything will go wrong… For people in Ukraine, it’s also very important that we have this partner — very big partner, you know — because many people understand that,” Stanko said.Stanko is also not quick to judge Zelenskiy’s actions, saying that “we have no choice” because there was a need for the military aid.Babinets explained her concerns over the relationship between the U.S. president and his Russian counterpart.”I’m afraid that in one moment, Trump and Putin will make some agreement and it will be maybe even against Ukraine. With your [previous] American…presidents, I didn’t have this feeling. Now, I can say…I have this fear,” she said.Stanko’s impression is more pragmatic: “Trump always thinks as a businessman…and, you know, I think that Ukraine is not interest[ing] for him. Russia is bigger and more interest[ing] than Ukraine.”On Zelenskiy, both journalists expressed their surprise at him being elected, but expressed concern about his relationship with the fourth estate, accusing him and his team of ignoring journalists.”I think Zelinskiy is copying this Trump style, which is very popular around the world. He tries to show that he can work, [that] he can be [a] good president without journalists. I mean, it’s a very, very big mistake. He’s on the beginning and I hope he will get it. And democracy works with journalists, with president[s], with everyone,” said Babinets.Stanko stressed the importance of financial support for journalists from foreign countries, explaining that “we live in such a country, [in] which most media [is] owned by oligarchs…we don’t want to work in this media.”Stanko encouraged the United States to continue its support for independent journalism in Ukraine: “When someone pressure[s] us as it was with my reports, with Anna’s reports, [the] U.S. can say that we…support this journalist. We support independent journalists.”According to a State Department website, the “Media Development Fund” grant program is administered by the Public Affairs Section of the U.S. Embassy in Kyiv and supports the development of free and independent media in Ukraine.For Stanko and Babinets, there is shared fear and frustration in reporting in their home country.”It’s very great to be in the United States receiving this award,” Babinets said. “We have feelings that we do something important for Ukraine.” Copyright © 2019, ABC Audio. All rights reserved.

Putin ‘on the ropes’ as Ukrainians continue counteroffensive

William and Kate take on prince, princess of Wales titles from King Charles

EXCLUSIVE: Zelenskyy to Muir on whether he regrets not warning Ukrainian people before invasion