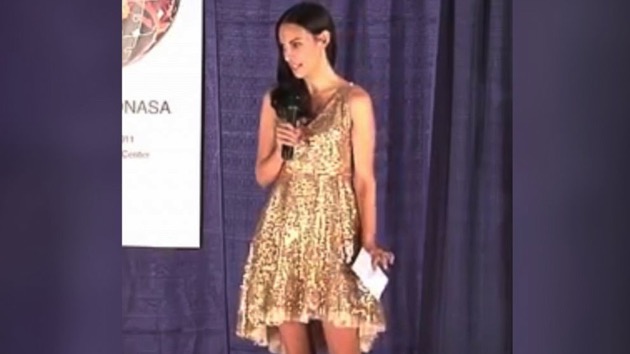 Rita King/@RitaJKing(NEW YORK) — One women’s’s tweet about a “sparkly” dress she wore for a science-focused talk is inspiring women to show up as their true selves.Rita King, of New York, wore a sequin dress to a NASA talk she gave to kids in 2011 after she received a letter from a group of girls attending the talk.The girls asked King — at the time a futurist at the National Institute of Aerospace — to “wear something sparkly” so “they could believe that scientists could also be sparkly,” King explained recently in a tweet.King, now the executive vice president for business development at Science House, a strategic consultancy, recalled being “thrilled” to get the request and bought a gold sequin dress just for the occasion.”I was blown away by it,” King told “Good Morning America” of the girls’ request. “To me, wearing the sparkly dress was a way of showing that I respect my audience, because they requested it.”King said she made an effort from that point on to make sure to wear sequins of some kind at every speech she gave on behalf of NASA.She found the dress she wore to her 2011 talk last week while cleaning out her closet and noticed it had a NASA pin still attached. Inspired by the memory, King tweeted about the dress, including a photo of herself wearing it and a close up photo of the NASA pin.

Cleaning out my closet, I came across this gown and remembered the little girls who sent me a letter and asked me to wear something sparkly for a talk I gave at NASA so they could believe that scientists could also be sparkly. pic.twitter.com/xOcZgkbiRg

King’s tweet has received thousands of shares and comments from moms, dads, grandparents and fellow scientists alike.”This is so important. The idea that masculine is serious and feminine is frivolous limits the options girls see for themselves and their future lives. This shows them that they don’t have to pick between their interests and their identities. Science is for everyone. Thank you!,” wrote one commenter.”My daughter is obsessed with all things sparkly, and she also likes to use tools and tinker. I love that she can see women like you!,” wrote another.Another commenter described a conversation she had with a young girl after showing her the photo of King, writing, “I said, ‘You can still be sparkly when you’re an astronaut.’ And she said, ‘YAY!!!"”King compares wearing something creative or sparkly while working on a serious subject, like science, to the phenomenon that happens when the sun shines on the surface of the sea, creating beautiful-looking sparkles.”It doesn’t change the power of the sea,” she said. “It’s a beautiful thing but the sea is where the power is.””I hope that part of what people are responding to is that the sequin gown changes nothing about the seriousness of the message,” King added.She also noted the significance of the fact that she wore sequins while speaking to kids, who as the next generation, will both define and redefine cultural norms and stereotypes.”We have the responsibility to give kids space to reinvent the system that they’re going to be adults in,” King said. “Women especially, and society, are learning every day what it means to shape new norms.”Copyright © 2019, ABC Audio. All rights reserved.