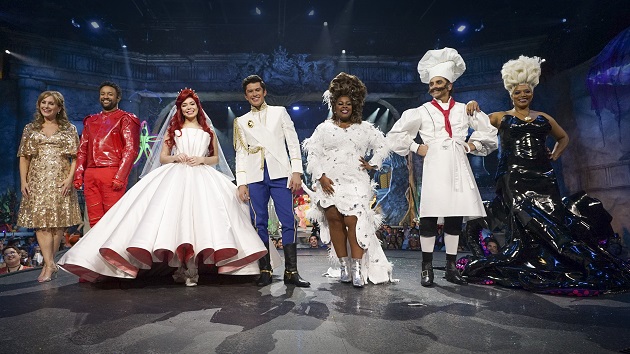 ABC/Eric McCandless(NEW YORK) — Disney fans were transported “under the sea” Tuesday night in The Wonderful World of Disney Presents The Little Mermaid Live!

The highly anticipated event celebrated the 30th anniversary of the beloved film and included a star-studded cast with Queen Latifah as Ursula, Auli’i Cravalho as Ariel and Graham Philips as Prince Eric.

To make the show even more special, live musical performances by the actors were seamlessly embedded with the original film.

Here are our favorite moments:

1. Jon Stamos is the star of the show. The end.

Looks like Jon Stamos still has it! He may have been cool, rock star Uncle Jesse on Full House, but he stole the show and pulled out all the stops as Chef Louis in the live performance. Stamos, who was almost unrecognizable in a chef’s costume and mustache, delivered an upbeat performance of the song, “Les Poissons,” and included a full-on fun dance number, too!

The live show dazzled with an amazing stage design and brought the animated film to life with the musical performances. In Cravalho’s performance as Ariel for the iconic song, “Part of Your World,” the set looked almost identical to the treasure trove from the original film with larger than life props resembling whozits and whatzits galore! The stage also included so many elements to help make each number feel like it was either underwater or on land, like the harnesses that allowed actors to leap above the audience like they were swimming, and puppeteers animating other stage elements like seaweed and fish to make it feel like each scene was in a different world.

3. Queen Latifah is the QUEEN

Let’s talk about Queen Latifah’s FIERCE performance as Ursula. We were already anticipating an incredible performance from her ahead of the live show, but she killed it with her performance in “Poor Unfortunate Souls.” Latifah brought the drama when she first appeared on stage with her ensemble as a more glammed-out Ursula, wearing a white wig, and skin-tight costume complete with tentacles like the villain in the film.

4. Graham Philips is the perfect prince

Stamos may have stolen the show as Chef Louis, but actor Graham Phillips made everyone swoon for Prince Eric. The actor, who has starred in shows like Riverdale and The Good Place, had a much larger role as Prince Eric in the live show than the original film with not one but two musical numbers from the Broadway musical. The song that stole everyone’s hearts? His rendition of “Her Song,” a ballad about being in love with Ariel’s voice at first sound. Awww.

Although many took to Twitter with split feelings online about the live show, the production was a special one because it stayed true to the original film, with clips from the original film. For many, it’s probably been a while since they’ve seen the 1989 version on a big screen and it was nostalgic to see the beloved film. Jodi Benson, the OG Ariel, even made an appearance in the beginning and introduced the show! Can you believe it’s been 30 years since she voiced Ariel in the film?

Disney is the parent company of ABC News and Good Morning America.