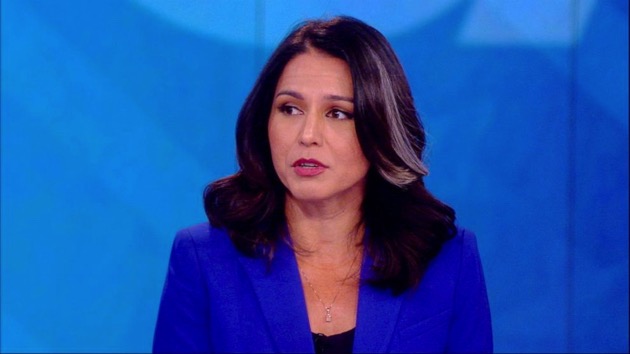 ABC News(NEW YORK) — In her third appearance on the show this year, Hawaii Rep. Tulsi Gabbard, appeared on The View Wednesday fighting back against those who have questioned her loyalty, calling the comments made against her “demeaning.””It’s offensive to me as a soldier, as an American, as a member of congress, as a veteran, and frankly as a woman, to be so demeaned in this way,” Gabbard told the hosts. “I am a patriot, I love our country … I have dedicated almost my entire adult life to protecting the safety, security and freedom of all Americans in this country.”Last month, Gabbard engaged in a tussle with former Secretary of State and Democratic presidential nominee Hillary Clinton, who told David Plouffe on “Campaign HQ”, a podcast run by the 2008 Obama campaign manager, that a female 2020 candidate was a “favorite of the Russians” and is being “groomed” by Republicans for a third-party run.Clinton suggested President Donald Trump’s campaign would attempt to deflect votes from his Democratic opponent and direct them toward a third-party candidate. While there are currently five Democratic women running for president, and Clinton didn’t name-names, her remarks appeared to be aimed at Gabbard.Clinton’s spokesman Nick Merrill told CNN in response to a question about whether she was referring to Gabbard simply said “If the nesting doll fits.”Gabbard responded later on, saying Clinton was a “queen of warmongers, embodiment of corruption, and personification of the rot that has sickened the Democratic Party for so long.”When asked by the hosts if she was running as a third party candidate, Gabbard said, “I’m running to build a New Democratic Party.”The lawmaker also recently changed course on impeachment proceedings against Trump. Gabbard said after reading the transcript of a call between Trump and Ukrainian President Volodymyr Zelenskiy that led to a whistleblower complaint, she had no choice.“Up to this point, I have been opposed to pursuing impeachment because it will further divide our already badly divided country,” Gabbard said in a Sept. 27 press release from her campaign. “However, after looking carefully at the transcript of the conversation with Ukraine’s President, the whistleblower complaint, the Inspector General memo, and President Trump’s comments about the issue, unfortunately, I believe that if we do not proceed with the inquiry, it will set a very dangerous precedent.”She said she didn’t want future presidents or other federal leaders to get the idea that its OK to abuse their position for personal gain without repercussion.Copyright © 2019, ABC Audio. All rights reserved.

TikTok mom fires back at comments criticizing how she feeds her baby
Report: Steven Spielberg takes out restraining order against alleged stalker
Giving Tuesday: Teen donates ‘snack packs’ to food pantries and more kids giving back
Trump campaign lawyer calls for fired DHS election security official to be ‘shot’
The Jerky Boys are back, and just when we can use a laugh
DOJ files appeal in E. Jean Carroll lawsuit against President Trump