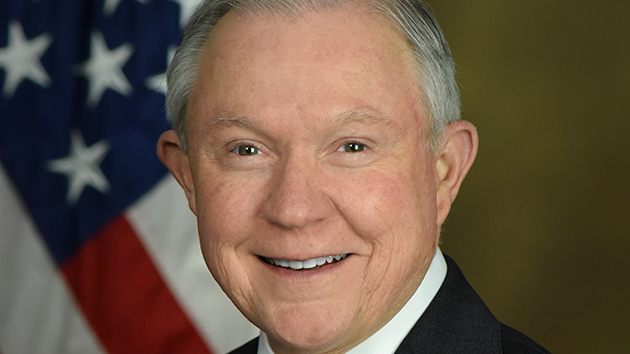 US Department of Justice(NEW YORK) — Jeff Sessions, the former U.S. attorney general and senator from Alabama, is expected to announce Thursday that he will launch a bid for Senate in Alabama, according to a Republican source familiar with his plans.Sessions has long been speculated as a potential candidate for his old seat after Democrat Doug Jones’ upset victory over flawed Republican candidate Roy Moore in 2017. Jones is now considered one of the most vulnerable senators up for re-election in 2020.The former attorney general is jumping into a crowded field in the Republican primary, which includes Moore, Alabama GOP Rep. Bradley Byrne, former Auburn football coach Tommy Tuberville, state Rep. Arnold Mooney and Alabama Secretary of State John Merrill.While he is a popular political figure in Alabama, Sessions remains unpopular with his former boss.It is unclear if President Donald Trump would embrace his candidacy if he were to secure the nomination. But the president is expected to attend a college football game between Alabama and Louisiana State University on Saturday in Tuscaloosa, according to ESPN.One of Trump’s allies on Capitol Hill, Sen. Lindsey Graham, R-S.C., said that while he is a fan of his former colleague, he called the move “problematic” given the animosity Trump has expressed towards Sessions.”I like Jeff, I thought he was a great senator. But the whole campaign will be about what Trump said about Sessions. And as you can imagine, that’d be kinda ugly and the president is pretty out there when it comes to the job he did as attorney general,” Graham told ABC News on Tuesday. “But I have a lot of respect for Jeff, he was a good senator. We’ll see what happens. But you could see that would be problematic. But it would be up to him.”Late last month, amid speculation that he was planning a bid, the president’s son, Donald Trump Jr., refused to nudge Sessions towards a bid, instead hedging on the question in an interview with Yellowhammer News, a conservative website in the state.”First and foremost we need someone who can win the election next November. We also need someone who is a fighter and unafraid to stand with the President and go toe-to-toe with the Democrats — and even weak-willed Republicans when necessary,” he told the outlet. “The people of Alabama will know the right person for the job when they see him or her.”During his time at the Justice Department, Sessions was frequently in the spotlight throughout the turbulent first several months of Trump’s presidency, from a hotly contested confirmation hearing to his recusal from the Russia investigation in March 2017. He was also consistently the target of the president’s ire as the protracted Mueller investigation loomed over the White House.Sessions announcement comes nearly one year after he exited the Trump administration, which was one day after the 2018 midterm elections — after Trump fired him and replaced him with his chief of staff Matthew Whitaker.”At your request, I am submitting my resignation,” Sessions wrote in an undated letter to the president announcing his resignation. Copyright © 2019, ABC Audio. All rights reserved.