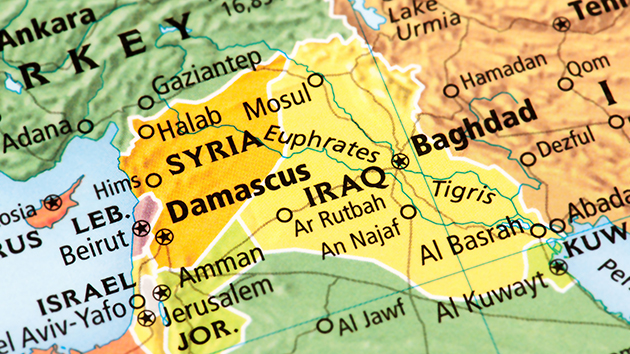 omersukrugoksu/iStock(NEW YORK) — Although the U.S. knows “almost nothing” about the new leader of ISIS, he is “a nobody,” according to a senior State Department official, making it difficult for the terror group to rally around him.Amid the hunt for the new ISIS leader, the U.S. will leave between 700 and 900 troops in Syria, with the official saying the “goals and means” of defeating ISIS, ridding Syria of Iranian-commanded forces, and securing a political transition haven’t changed, despite President Donald Trump’s new focus on “taking” oil.Trump said last Friday that he and his administration “know exactly who [the new leader] is!” one day after the terror group announced a new leader under the nom de guerre Abu Ibrahim al-Hashimi al-Qurashi. Al-Hashimi replaces Abu Bakr al-Baghdadi, the terror chief that created the group, expanded it to the so-called “caliphate” the size of Great Britain, and killed himself in an explosion amid a U.S. special forces raid in late October.U.S. ambassador-at-large for counterterrorism Nathan Sales said Friday that the administration was “looking into the leader, his role in the organization, where he came from.” But the senior official said Wednesday the new leader “appears to be a nobody. Nobody knows his background.””We think we know a bit about him … What little we know about him, we’re not impressed,” the official added. “If he’s in Iraq or Syria, we don’t think he’s too long for the world, anyway.”The announcement of the new leader came in an audio message released last week by a new ISIS spokesperson, after Abu Hassan al-Muhajir, the spokesperson and right-hand man to Baghdadi, was also killed, in a separate U.S. airstrike.The speech provides little information about the new leader or spokesperson, with both names pseudonyms that mask their real identity, but tie them to the Quraysh tribe, a historic Arab tribe based near Islam’s holy city Mecca. Doing so is a way to create legitimacy for their leadership because the prophet Muhammad is said to be from the Quraysh tribe.Al-Hashimi is also identified as a “caliph” — meaning the group still considers itself a caliphate despite its loss of territory. Pledges to the new leader have come in across social media, according to analysts, who have warned that the terror group has fierce affiliates in West Africa, the Middle East, South Asia and even Southeast Asia.But the senior official said that because al-Hashimi’s true identity is not publicly known, it’s become a “major issue” for the terror group to rally supporters around him.Earlier this week, Turkey announced that it has captured al-Baghdadi’s sister, known as Rasmiya Awad, along with her husband, daughter-in-law, and five children. U.S. policy in Syria has undergone whiplash in recent days, from a deliberate and orderly U.S. withdrawal that had stalled, to an immediate pullout of all 1,000 troops in the northeast, to now keeping 700 to 900 troops to “protect the oil,” in the president’s words.”We did leave soldiers because we are keeping the oil. I like oil. We are keeping the oil,” Trump said Friday at the White House.But the senior State Department official said the U.S. will have nothing to do with the oil. “The oil is being worked by the local authorities for the benefit of the local communities. We have no guidance here in the Department of State from the administration to do anything with the oil fields.”The official acknowledged that “the conditions have changed” after the initial U.S. withdrawal, but now says that the “goals and means are basically the same” — a U.S. military presence that is there to ensure ISIS’s enduring defeat and create leverage for a political transition in Syria and the expulsion of all Iranian-commanded forces from the country that threaten America’s allies like Israel.Copyright © 2019, ABC Audio. All rights reserved.