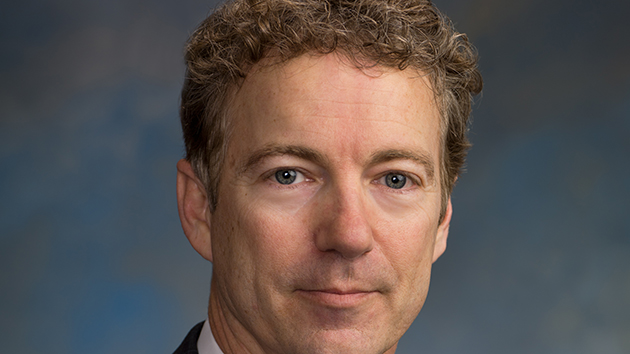 US Senate (Office of Sen. Rand Paul)(WASHINGTON) — Sen. Rand Paul, R-Ky., blocked a resolution that reaffirms the Senate’s support of whistleblower protections.The move on Wednesday comes after he publicly called for the whistleblower at the heart of the impeachment inquiry to be named publicly.Senate Democrats asked for unanimous consent to pass a resolution calling on Congress and the Trump administration to protect whistleblowers, including the one who filed a complaint alleging the White House attempted to strong-arm Ukraine into investigating a political rival.Democrats, led by Senate Minority Leader Chuck Schumer and Hawaii Sen. Mazie Hirono, introduced the resolution on Wednesday that would express the “sense of the Senate” that Congress and the president “have a duty to protect the identity of the whistleblowers and ensure that they are not retaliated against.””Exposing the whistleblower’s identity would endanger the health and safety of them and their family,” Schumer said on the floor Wednesday. “It would also be a chilling message to future patriots that they do their duty to report wrongdoing at the risk of exposure, retaliation and retribution. Why don’t we see a single other Republican to stand up in favor of this here, today? We should.”Their push comes amid increasing calls from the administration and Paul to expose the whistleblower’s identity.”With his attacks on the whistleblower, Donald Trump has made clear that he will use the full power of his office to bully and intimidate and threaten anyone who dares to stand up to him or speak out against him,” Hirono said on the Senate floor.But Paul, who’s already called for the whistleblower’s name to be made public, objected to the unanimous consent request.”I support whistleblowers, and I do think that they have a role to play in keeping government accountable. They shouldn’t lose their jobs or be prosecuted for their willingness to speak,” Paul said Wednesday.Paul previously said he’s considered naming the whistleblower on the Senate floor, telling Fox News on Tuesday, “Nothing stops me, there’s no law that stops me from doing it other than that I don’t want to make it about the one individual.”Paul has not yet named the individual.Paul instead threw his support behind his own bill that would “make clear that the sixth amendment is not superseded by statutes,” and that the president is afforded the right to understand the nature of the allegations against him — and the right to face his accuser.Long-standing whistleblower laws protect the identities of government employees who come forward with accusations of wrongdoing within the government. The whistleblower’s lawyers have said that revealing their client’s name could threaten their client’s personal safety and that there have already been death threats made against the individual.ABC News is not reporting on the whistleblower’s identity. All that is publicly known of the whistleblower is that he or she is a member of the intelligence community.Several Republicans, including those in leadership positions, have said they don’t agree with Paul’s call to out the whistleblower. But others, Sen. Lindsey Graham among them, are growing increasingly frustrated with the impeachment inquiry and want Trump to know the whistleblower’s identity.Graham, who called the inquiry a “sham” and a “joke,” told reporters Wednesday that whistleblower laws are “designed to protect you from being fired if you come forward.””It doesn’t give you anonymity,” Graham added. “Nobody should be prosecuted based on an anonymous accusation.”Copyright © 2019, ABC Audio. All rights reserved.