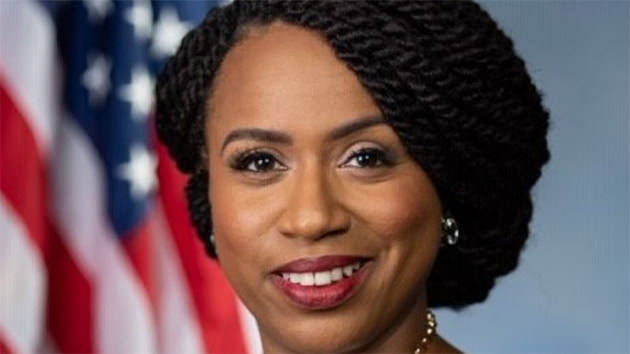 US House of Representatives (Office of Rep. Ayanna Pressley)(WASHINGTON) — Democratic Rep. Ayanna Pressley of Massachusetts endorsed Sen. Elizabeth Warren on Wednesday, delivering the front-runner candidate one of her biggest profile endorsements so far in the 2020 race and solidifying her break from the so-called “Squad.”Reps. Alexandria Ocasio-Cortez of New York, Rashida Tlaib of Michigan and Ilhan Omar of Minnesota, all endorsed fellow progressive 2020 candidate Bernie Sanders last month.Pressley, who makes up the fourth member of progressive group of freshmen Democrats and have come to call themselves the “Squad,” stayed silent until Wednesday, when she endorsed her home-state senator.”I have seen Elizabeth in small church basements and in packed gymnasiums. And she is consistent. She never loses sight of the people,” Pressley said in a video released on Wednesday for her endorsement of Warren.Throughout the video, Pressley explained that her support for Warren stemmed from her focus on “power.””You’ve all heard about the senator’s plans but here’s the thing. The senator’s plans are about power. Who has it, who refuses to let it go, and who deserves more of it. For Elizabeth and for me power belongs in the hands of the people,” Pressley said.“Thank you, @AyannaPressley! I’m proud to be fighting alongside you to put power in the hands of the people,” Warren responded on Twitter.Pressley was the first black woman elected to Congress from Massachusetts when she won her race in 2018. Her endorsement and participation in the campaign could lend a strong voice to Warren’s efforts in the south, where she continues to trail her opponents, especially in polling of black voters who make up a significant part of the electorate.Pressley’s endorsement comes as Warren prepares for a swing through North Carolina this week, where Pressley is set to join her and participate in a town hall discussion. Warren will then continue on the South Carolina.Pressley was expected to endorse Warren because of the home-state connection, and more so after the other members announced their endorsement for Sanders without Pressley.In 2018, Warren stayed out of Pressley’s challenge of incumbent Democratic Rep. Michael Capuano, not endorsing either of them and, in doing so, slighting Capuano. She then campaigned with Pressley through the general election.Warren has received other key home-state endorsements, such as Democratic Sen. Ed Markey and Democratic Rep. Joe Kennedy, who are now running against each other in a Senate race for Markey’s seat. Warren endorsed Markey early and is now sticking to it, despite a close connection to Kennedy, who was her former student at Harvard.Notably, in her video endorsing Warren, Pressley echoes a major talking point of Warren’s fellow front-runner, former Vice President Joe Biden, often uses on the trail: “This election is a fight for the very soul of our nation,” she says in her endorsement video for Warren. Biden’s words: “This election is a battle for the soul of our nation.”Warren trails Biden in big-name endorsements, according to FiveThirtyEight’s endorsement tracker.Biden has netted endorsements from three governors and five senators so far, while Warren has yet to be endorsed by a governor and has been endorsed by just one senator.2020 hopeful Sen. Kamala Harris of California also beats Warren out in the endorsement tracker, despite Warren’s recent endorsement from Democratic Rep. Katie Porter of California.Porter, who has deep ties to two candidates in the 2020 race, Warren, her former Harvard law school professor, and Harris, who was her boss when she was the state Attorney General, endorsed Warren in October. She campaigned with Warren on her last swing through Iowa, a key state in the Democratic primary race and Porter’s home state.Warren has also netted two endorsements so far that went to Sanders in the 2016 race: the Working Families Party, a progressive organization, and Democratic Rep. Raúl Grijalva of New Mexico, who was the first congressman to endorse Sanders last cycle.And last week, Philadelphia Mayor Jim Kenney announced his endorsement of Warren, marking a split from other Pennsylvania Democratic leadership in a key state for Biden, who was born in Scranton, Pennsylvania, held his campaign kickoff rally in downtown Philadelphia and chose to base his campaign headquarters just across the street from Philadelphia’s City Hall.Copyright © 2019, ABC Audio. All rights reserved.