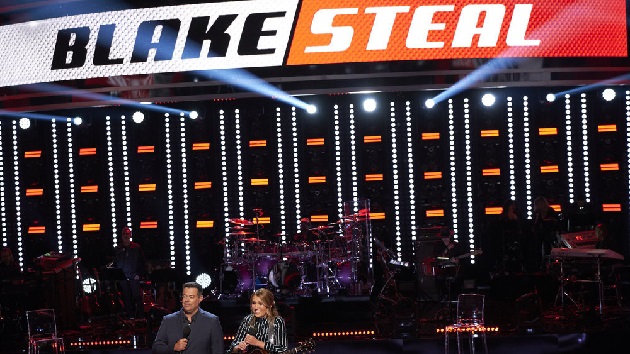 During the knockouts, each coach had a chance to steal an artist from someone else’s team, and Blake, the only remaining coach with one left, used it to snatch an artist away from Kelly.

Here are the highlights from Monday’s show:

Team Legend’s Preston C. Howell, 15, crooning the jazz standard, “The Way You Look Tonight” faced off against 18-year-old country-pop singer Marybeth Byrd, tackling Adele’s “All I Ask.” During rehearsals, Legend pumped up the two teens, saying they were way ahead of most kids their age, vocally. His advice to them simply to “come prepared and give us your best.” Preston and Marybeth didn’t make it easy for John, who struggled to decide on the winner. He ultimately chose, Byrd, who moves on to the live playoffs.  Howell shuffles off into the sunset.

Next, Blake pitted Ricky Braddy, performing John Legend’s “So High,” against Zach Bridges, covering “The Dance,” by Garth Brooks.  Both, noted Shelton, were daring song choices: Ricky would be singing Legend’s tune with John watching right there in front of him; Zach would have to do justice to a familiar country classic. Fellow coaches John and Kelly gave the round to Jake, but Gwen couldn’t decide.  Blake praised both artists for “laying it out there,” but declared Ricky the winner. He advances to the live playoffs. Zach heads home.

The final knockout saw Team Kelly’s country singer Gracee Shriver, singing The Wreckers’ “Leave the Pieces,” facing off against Annie Lennox-styled artist Damali, tackling Demi Lovato’s “Sober.”  Kelly’s fellow coaches were split on the winner, with Blake and Gwen picking Damali, and John leaning towards Gracee. After agonizing over her decision, Kelly declared Damali the winner.  She moves on to the live playoffs.

But so does Shriver, thanks to a last-minute steal from Blake.

The live playoff rounds begin, when The Voice returns on Monday at 8 p.m. ET on NBC.

Is James Bond the role nobody wants? Longtime producers sound off on search