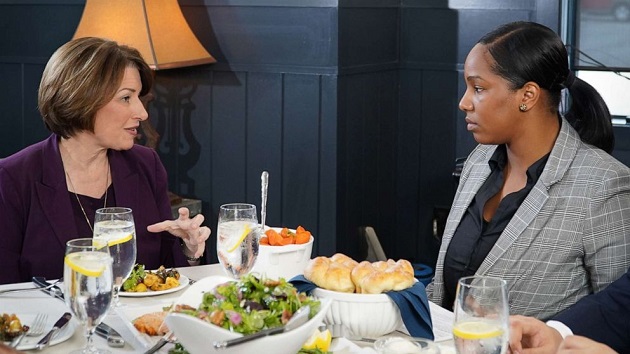 Seacia Pavao/ABC(BEDFORD, N.H.) — As the first nominating contests of the 2020 Democratic presidential primary continue to draw near, Minnesota Senator Amy Klobuchar sat down for a candid and wide-ranging conversation with undecided voters in the key early voting state of New Hampshire.The meal at the Copper Door in Bedford, New Hampshire is the third installment of “Around the Table,” a series bringing together 2020 presidential candidates and voters for a conversation centered around the dinner table.Joined by ABC News Anchor and Chief National Correspondent Byron Pitts, Klobuchar took questions from three undecided voters: Lianne Hughes-Odom, a high school history teacher and adjunct professor at the University of Massachusetts in Boston; Neil Sharma of Boxborough, Massachusetts who works in sales operations at Dell Technologies and Lizzy Berube, a private gardener and retired respiratory care practitioner from Campton, New Hampshire.Klobuchar, who has seen an uptick in fundraising since her performance in last month’s Democratic debate in Ohio but remains mired towards the middle of the pack in national and early state polling, was pressed on her plans to reform America’s immigration system, improve access to education, curb gun violence and ensure access to affordable health care.But the Minnesota senator was first pressed on a spate of stories that emerged after she announced her presidential bid that she was a difficult boss, something that concerned Berube about her ability to get things done in Washington.”You have a wonderful, bipartisan ability to pass bills, but what I’m concerned about — the one thing that has been said about you – is that you’re difficult to work for,” Berube said.”First of all, I love my staff,” Klobuchar assured her. “And one of the reasons we’re so successful, it’s not me, it’s them. And I am tough on people, and you can always be better. And I push some people, and as a result, a few of them didn’t like me,” added Klobuchar, who also pointed out that nearly 70 current and former staff members signed a letter saying they had positive experience working for her.As the conversation turned to matters of policy, Sharma, whose father immigrated from India, said he does not believe crossing the border into the United States should be a crime, a position held by 2020 Democratic presidential candidate and former Housing and Urban Development Secretary Julián Castro, and pressed Klobuchar on how she plans to combat fear-mongering about immigrants coming to the United States.”We’re in New Hampshire right now…it’s a very, very white state. There are not many people of color here…So in a state that’s this white…if people are scared because they’re being fed fear by people who are in power, how do you convince those people they shouldn’t be scared, if there’s nobody of color for them to interact with around them?” Sharma asked Klobuchar.”I do think they are starting — everywhere they go there are immigrants around that are working…I think more and more Americans, as we travel the country, see immigrants as part of our economy…I actually make an economic case — that regardless of if people have immigrants in their area or not, they understand they need workers for the jobs,” Klobuchar responded.On health care, Klobuchar re-iterated that she wants to build on President Barack Obama’s signature legislation, the Affordable Care Act, and create a public option for health insurance to compete alongside plans offered in the private market.”I like the idea of a public option … because it creates a competitive alternative to private insurance, but people can still keep their own private insurance … because that’s 149 million Americans,” Klobuchar argued.Sharma asked Klobuchar why some in the Democratic Party are taking a “rip it all down and start over” approach on healthcare.”I think people are so frustrated with the costs…and this has always been something that’s considered out there…the idea of just starting over with Medicare for All. My argument would be we can look at everything, but we’ve got to start somewhere…Kicking 149 [million} people off their insurance in four years, current insurance, I think is going to be very problematic. I just don’t think it’s good policy,” Klobuchar, who has sparred with Democratic presidential rivals Sen. Elizabeth Warren of Massachusetts and Sen. Bernie Sanders of Vermont over “Medicare for All”, argued.Hughes-Odom asked Klobuchar about her stance on reparations for American descendants of African slaves brought to the United States.Klobuchar said she supports legislation that would establish a commission to study the issue, but did not offer more specifics about how reparations would be distributed.”It may not be individual checks. It may be that we are investing in areas that have been perpetually impoverished because of this. And what this bill is — Senator [Cory] Booker’s leading it in the Senate. [Representative] Sheila Jackson Lee is leading it in the House. And what it is, is it looks at what would be the best way to work on this, and that is what I think we need to do,” Klobuchar said.Towards the end of the conversation Klobuchar pushed back on questions about the viability of her campaign going forward, telling Pitts that she sees herself as a candidate in the same vein as two relatively unknown Democrats that saw rapid rises to win the party’s nomination and eventually the presidency: Jimmy Carter and Bill Clinton.”I have money in the bank. I’m running ads right now in New Hampshire and in Iowa. I am not someone…that has come from a big state that’s run for president before, but neither did Bill Clinton or Jimmy Carter,” Klobuchar argued.”We already got the loudest voice in the room, and that guy’s in the White House,” she added. “I don’t think that’s what people want. I think they’re tired of the noise and the nonsense and the extremes. They want to find someone who actually wants to get things done and have their back and tell the truth.”