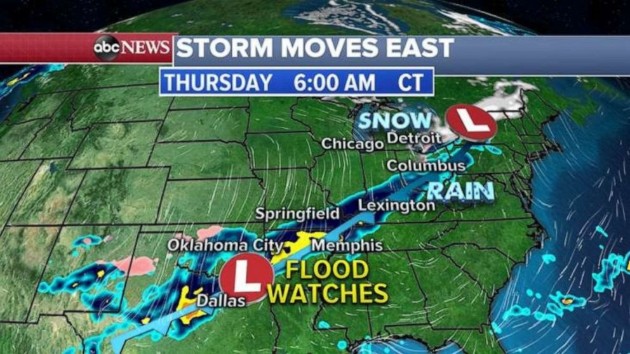 ABC News(NEW YORK) — A low pressure system and a cold front moved through the Midwest in the last 36 hours producing up to half a foot of snow from Minnesota to Michigan. Numerous accidents and spinouts have been reported due to the snow — even I-94 was shut down for a time Wednesday due to significant crashes from icy roads.Thursday morning, this same cold front now stretches from Texas all the way to western New York with flooding ongoing in Oklahoma and Arkansas and snow near the eastern Great Lakes. Up to 4.5 inches of rain fell with this cold front in northwest Arkansas where rivers are rising rapidly Thursday morning and flooding is occurring.By Thursday evening, this cold front will move into major Northeast cities on I-95 from Washington, D.C. to Boston with rain mostly, and snow showers in central Pennsylvania, western New York and into northern New England. As the cold front moves through the Northeast later Thursday night, major coastal cities will see their first freeze of the season.The coldest morning for the East Coast will be Saturday morning when wind chills will be in the teens in the Northeast and 20’s all the way to Atlanta.If you think this is cold, just wait until early next week, when an even colder, polar air mass will move into the lower 48 states. There could be record lows next week in the upper Midwest as actual air temperature drops close to zero degrees.Copyright © 2019, ABC Audio. All rights reserved.

Turbulent week of weather ahead with 3 different storms tracking across US
Larry King remembered by celebrities, politicians: ‘A newsman who interviewed the newsmakers’
Maine shifts some vaccine doses away from CVS and Walgreens
Pastor says addressing resistance to Biden administration is part of the job
Disney moves ‘The King’s Man’, ‘Bob’s Burgers’ film, as COVID-19 shut-downs continue
John Krasinski, Dan Levy, Regina King are the first ‘SNL’ hosts of 2021