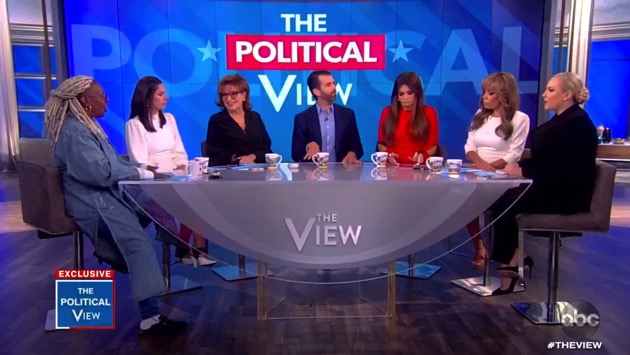 ABC(NEW YORK) — President Donald Trump’s son, Donald Trump Jr., appeared on ABC’s The View on Thursday to promote his new book Triggered: How the Left Thrives on Hate and Wants to Silence Us.Trump Jr., has used the promotion of his book as a platform to defend his father in the face of a congressional impeachment inquiry into the president’s request to the Ukrainian president to investigate former Vice President and his 2020 rival Joe Biden, and his son, Hunter Biden’s, business dealings in Ukraine.“That’s a big part of the book which is, it’s not a level playing field in terms of outrage. We live in an outrage culture,” Trump Jr. told the hosts during a protracted exchange in which the hosts challenged him for tweeting an article on social media the name of the alleged anonymous whistleblower at the heart of the impeachment inquiry.During the show, Meghan McCain, a co-host on The View and the daughter of late Arizona Sen. John McCain pointedly asked Trump Jr. about the tenor of the political rhetoric espoused by both he and his father.”A lot of people miss the soul of this country. You and your father have hurt a lot of people and put a lot of people through a lot of pain, including the Khan family who was a Gold Star family who I think should be respected because of the loss of your son,” McCain said of the family of Capt. Humayun Khan, a Muslim American, U.S. Army soldier who was killed in Iraq in 2004. “Does all this make you feel good?”Trump Jr. took exception to the characterization and argued that his father’s administration is giving a voice back to certain segments of America.”I don’t think any of that makes me feel good, but I think we got into this because we wanted to do what’s right for America. My father has been working tirelessly to bring back the American dream to those who have watched politicians with no business experience send that American dream abroad to countries that hate our guts,” he said. He has brought jobs back. He has created unprecedented levels of unemployment numbers for African-Americans for Hispanic Americans.”

"You and your family have hurt a lot of people…" @MeghanMcCain says. "Does all of this make you feel good?"Trump Jr.: "I don't think any of that makes me feel good, but I do think that we got into this because we wanted to do what's right for America." https://t.co/eDnNuG6K3w pic.twitter.com/IM5hFiAvP6

My son, @DonaldJTrumpJr is coming out with a new book, “Triggered: How the Left Thrives on Hate and Wants to Silence Us” – available tomorrow, November 5th! A great new book that I highly recommend for ALL to read. Go order it today!

The New York Times has reported that Trump Jr. writes in his book that he was cautioned by White House lawyers about his “aggressive” defense of his father on social media in the midst of the impeachment inquiry.Trump Jr. has also been fervent on the campaign trail, traveling around the country to stump for Republicans who are seeking seats. He appears at rallies, fundraisers and high-dollar dinners to rally supporters and donors for the party.Nationwide polls have showed growing support for the impeachment and removal of President Trump. An ABC News/Washington Post poll released last week showed that 49 percent of Americans support impeaching and removing President Trump from office. Another poll from Monmouth University showed that among registered voters, President Trump’s approval rating is at 44 percent.On Thursday, Trump Jr. told the show’s hosts that it “doesn’t matter” which Democrat ultimately faces off against his father in next year’s general election.”It doesn’t matter that much to me … I do spend a lot of time in middle America, I spend a lot of time there and honestly, people are happy,” he said.

.@HuntsmanAbby: "Who do you hope runs against your dad?"Donald Trump, Jr. on @TheView: "It doesn't matter that much to me … I do spend a lot of time in middle America, I spend a lot of time there and honestly, people are happy." https://t.co/gaK4yIkueb pic.twitter.com/KuTeFldtsW

Late last month, amid speculation that former Attorney General Jeff Sessions was planning a bid to return to his old Alabama Senate seat, Trump Jr. refused to nudge Sessions towards running, instead hedging on the question in an interview with Yellowhammer News, a conservative website in the state.”First and foremost we need someone who can win the election next November. We also need someone who is a fighter and unafraid to stand with the President and go toe-to-toe with the Democrats — and even weak-willed Republicans when necessary,” he told the outlet. “The people of Alabama will know the right person for the job when they see him or her.”Copyright © 2019, ABC Audio. All rights reserved.

Congress to hold first hearing on UFOs in over 50 years