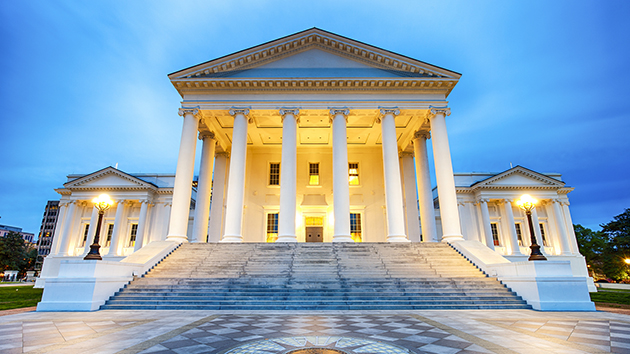 traveler1116/iStock(RICHMOND, Va.) — Democrats who ran on newly-progressive platforms, like the Green New Deal, and made major gains in the Virginia state government on Tuesday credit those approaches as part of the reason for their successes at the close of expensive and ultra-competitive races.Democratic proponents and activists argue that a party-wide adoption of the state’s Green New Deal plan helped the party flip six seats in the state’s House of Delegates and two in the Senate. The Virginia Democratic Party rolled out its support for the plan in September in the run-up to the election. Similar to the Green New Deal legislation which has been introduced to Congress, Virginia’s plan calls for net-zero emissions by 2050 and the creation of jobs in renewable energy sectors, while pursuing vast social welfare programs.”Tonight showed that running on the Green New Deal is a key part of how Democrats can win elections. The polls and election results tell a clear story: the Green New Deal is a winning issue,” said Varshini Prakash, the executive director of the Sunrise Movement, which advocates for grassroots organization surrounding the passage of the Green New Deal and legislation related to climate change.”When Nancy Pelosi and corporate Democrats try to argue otherwise,” Prakash said, “it’s nothing more than a thinly-veiled attempt to shut down progressive policies and protect the interests of corporate donors.”With a Democrat in the governor’s mansion, this will be the first time in 26 years that Democrats will have a trifecta in the state government.Progressives in the 2020 race, such as Vermont Sen. Bernie Sanders, spent Monday night in Manassas, stumping for re-elected State Delegate Elizabeth Guzman, who was the first Latina woman elected to the House, and State Delegate Lee Carter, who both support the Green New Deal.In addition, Delegate-elect Josh Cole flipped House District 28, the former seat of the speaker of the delegates which hasn’t been in Democratic hands since 1982, running on policies like the Green New Deal.“When I thought about the Green New Deal, especially when we’re specifically focusing here on the Virginia Green New Deal, to me, it’s really smart politics,” Cole told ABC News. “It’s the intersection of a plan, that it creates jobs that pay well, it protects our environment and discrimination against people.”Cole’s new seat sits in Stafford County and encompasses Fredericksburg in northern Virginia, an area of the state where Democrats are starting to see more success. Cole won the seat by four points and said that voters in his district were majorly concerned about transportation and infrastructure issues and making long-term improvements on roads and bridges.Dan Palazzolo, a professor of political science at the University of Richmond, said Democrats were able to fold together ideas of the Green New Deal to soften the shock value of the term to voters.“It was kind of incorporated into economics, incorporated into transportation. It’s just being smart. They were trying to take the edge off and fold it into more pragmatic thinking,” Palazzolo said.The state’s Democratic party in September endorsed the Virginia Green New Deal, signaling a shift left as the state plays into a nationwide trend of Democratic inroads in the suburbs.Also among the state Democratic party’s adoption of progressive policies earlier this year were resolutions in support of 100% clean energy and $15 an hour minimum wage.While statewide races saw stops from nearly every 2020 contender, not every Democrat that received backing from presidential candidates aligned with Green New Deal ideas.But even as progressives laud their success, a number of moderate-leaning 2020 contenders are taking Tuesday night’s results nationwide as a cue that Americans are highly interested in less-progressive campaigns.Wednesday at her filing for the New Hampshire primary, Minnesota Sen. Amy Klobuchar touted the success of candidates in Virginia that she put her name behind.“You look at Virginia, I actually helped there with some of the legislative races. And you look at who won there, this incredible diverse field of candidates…who are really the antithesis of what this president is about,” Kloubuchar said.Throughout the race, Klobuchar has used her status as a moderate to try and court voters and detract attention from her more progressive competitors.“If you are tired of the extremes in our politics and you are looking for someone that is going to have your back, and you are tired of the noise and nonsense, you have a home with me,” Klobuchar said to supporters Wednesday.Montana Gov. Steve Bullock, also a Democrat in the race for a White House bid, signaled that the results in Tuesday night’s elections are all indicators of successes to come for moderates in 2020.“Tonight’s results are a wake-up call for national Democrats. The path to winning back the places we’ve lost isn’t through impractical proposals or the latest Beltway obsessions — it’s by focusing on solving problems in the here and now,” Bullock said in a statement Tuesday night.For Cole, the strongest case for adopting the Green New Deal came down to what voters in his now-blue district are really looking for.“The people in our community are ready for representatives that normally represent them, that understand their daily struggles and understand those issues,” Cole said. “We did it different in Virginia this year because we talked about the issues right in our community.”

Republicans were able to ward off challenges in some tight races in both the Senate and House and ultimately kept control of a few seats within razor thin margins.“It seems to me that it’s going to be viewed now as pretty much a Democratic state. And so the extent to which presidents are going to compete here is going to be a lot less than it was, certainly eight years ago.”In 2008, former President Obama won the state by seven points. In 2012, his margin of victory narrowed, and he only beat out Republican Mitt Romney by three points. Voters there, though, also overwhelmingly sent Republicans to Congress that year.In 2016, Clinton carried the state by five points. Although voters in Virginia have consistently elected Democrats to send to the White House and U.S. Senate, their inroads in smaller statewide races have seen increasing energy, although Republicans are still holding tight in some districts.“I think it was a continuation of a trend that started last election. The continuation of the trend was a little different this time, I think that the policy agenda was much more on the Democratic field,” Palazzolo said. “Democrats clearly gained ground in the suburbs, but even within that context, there’s some battles going on.”Copyright © 2019, ABC Audio. All rights reserved.