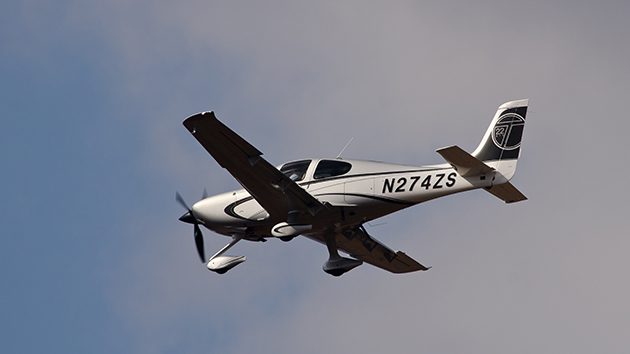 nomis_g/iStock(UPLAND, Calif.) — A single-engine airplane flew into a home in California on Thursday morning, killing the pilot in a fiery crash.The pilot was the only passenger on the airplane that crashed into the Upland home, according to the San Bernardino County Fire Department, which responded to a call about the fire at 11 a.m. Since then, the fire department said it has accounted for all residents of the home and gotten the fire under control.“It’s unbelievably lucky,” Capt. Marcelo Blanco, of the Upland Police Department, said. “The way this plane went down and where…it landed right in their living room. We got their pet hamster out. The dog’s still missing.”The plane was a Cirrus SR-22, a small plane known for its parachute system, according to the the Federal Aviation Administration. The pilot died despite the airplane’s parachute deploying, Marcelo said.Blanco noted that there the burning carbon fiber from the plane could pose a hazardous materials danger, but the San Bernardino County Fire Department said that exposure had been mitigated.The Upland Police Department is investigating the scene in conjunction with the FAA and National Transportation Safety Board.Copyright © 2019, ABC Audio. All rights reserved.

One dead, two missing after barge crashes into boat on Ohio River