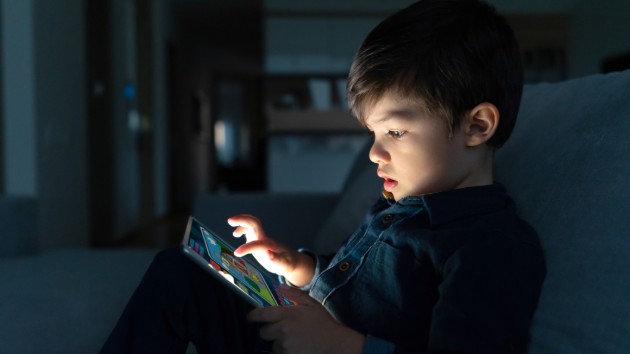 andresr/iStock(NEW YORK) — Screen time: It’s the home battlefield between parents and kids. But should it be?Some parents are saying ‘no,’ and refuse to set limits on how much time their kids spend on devices.Franci Haskell is one of those parents. Her two sons, ages 9 and 11, are allowed to use their phones as much as and whenever they like.She told ABC News’ Good Morning America the boys got the phones because they have a long commute to school and back in New York City — more than an hour each way.”They play games or talk with their friends,” she said of the boys’ device usage. “They don’t surf the internet or have social media.”The long-term effects of screen time on kids is not yet known. However, a new study from Cincinnati Children’s Hospital Medical Center published in JAMA Pediatrics showed evidence that brain structure may be altered in kids with more screen use.Christine Burke of Bethlehem, Pennsylvania, also does not limit her kids’ screen time.”We live in a digital age and they are digital natives,” she said. “They don’t know any different”Burke’s experimentation with unrestricted screen time began when she read an article by a mom who didn’t set screen time limits as long as her kids met some criteria.So one summer, she decided that once the kids had done an agreed upon amount of reading, creative work and exercise, they could have their devices.”It worked beautifully,” she said.Burke told GMA she “doesn’t see the value” in limiting screen time. She pointed out her kids have learned and pursued their passions online. Her oldest child, now 17, is off to film school.

“He learned digital effects and other skills I couldn’t teach him,” she said.Still, it’s not all educational, Burke said. Her kids spend time on social media, too. In addition to being a writer, Burke is a social media manager. She and her husband have open and ongoing discussions with their kids about proper social media usage.”We talk about digital citizenship and how to express yourself properly online,” she said. “It’s very much like teaching manners at the dinner table.”Burke believes that parents who say their kids don’t have social media accounts are fooling themselves. “I tell them it’s not that their kids don’t have it, it’s just that they [the parents] don’t know it.”The American Academy of Pediatrics recommends parents of kids older than 6 “place consistent limits on the time spent using media, and the types of media, and make sure media does not take the place of adequate sleep, physical activity and other behaviors essential to health.”Still, the topic of screen time is a hot one in parenting circles and online groups. Haskell said she usually feels judged for her stance on screen time when the topic comes up.”It’s like I’m going to get my head bitten off” when she’s open about her kids’ screen time usage, she said. “I kind of roll my eyes. Your kid might be left out if they can’t talk with their friends.”Burke told GMA that kids’ social lives exist in the DMs of Instagram. She said her kids are able to regulate themselves and manage their own screen time, something she and her husband wanted them to achieve before heading off to college and living on their own.”My son will say, ‘gosh, I’ve been texting for hours. I need a break,"” she said. Copyright © 2019, ABC Audio. All rights reserved.

Extreme heat safety tips: What to know about heat stroke vs. heat exhaustion