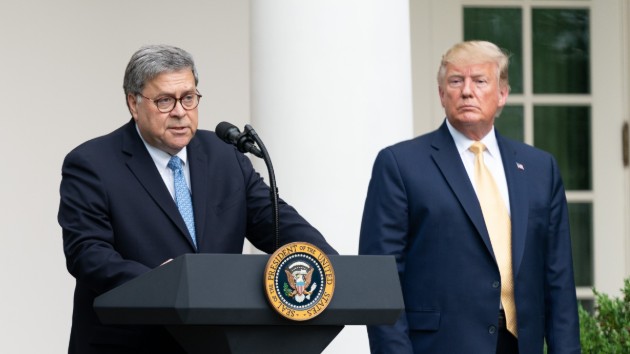 Official White House Photo by Shealah Craighead(WASHINGTON) — President Donald Trump on Thursday denied reports he wanted Attorney General William Barr to hold a news conference to say he broke no laws during his July 25 phone call with Ukrainian President Volodymyr Zelenskiy. The story was first reported by the Washington Post and multiple sources familiar with the matter confirmed it to ABC News.Trump tweeted that the story is “totally untrue,” saying “the degenerate Washington Post MADE UP the story about me asking Bill Barr to hold a news conference. Never happened, and there were no sources!”Barr declined to hold the news conference, the sources told ABC News.Sources said the request came in September, soon after the White House released a memorandum reconstructing the president’s call with Zelenskiy.It was not immediately clear why Barr declined to hold a news conference, but ABC News has previously reported that the attorney general was irritated Trump brought him up on the call in tandem with his personal attorney Rudy Giuliani. While Barr did not hold a press conference, the Justice Department did issue a statement soon after the release of the initial whistleblower complaint about the president’s call with Zelenskiy. In the statement, a Justice Department spokeswoman said the criminal division had reviewed the official record of the conversation and determined that “there was no campaign finance violation and that no further action was warranted.”That satisfied the president, according to one person with knowledge of what took place, and aides were able to redirect his concerns. The president has mentioned Barr’s refusal to associates in recent weeks, saying he wished the attorney general had held a press conference. The revelation comes as Democrats prepare to take their impeachment inquiry public next week with televised hearings featuring key witnesses who have previously testified behind closed doors to House investigators and whose testimony Democrats argue builds a case of a quid pro quo to get Ukraine to launch investigations about the president’s political rivals. Copyright © 2019, ABC Audio. All rights reserved.