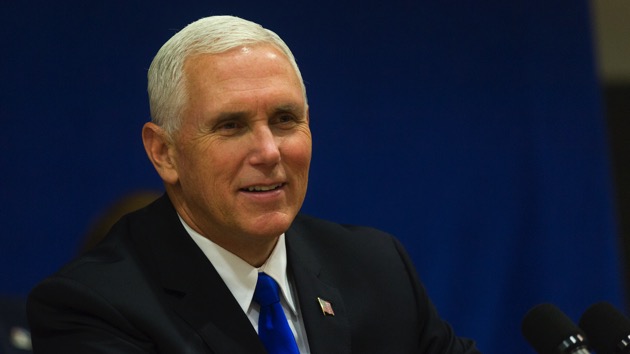 Official White House Photo by D. Myles Cullen(CONCORD, N.H.) — Vice President Mike Pence is in New Hampshire Thursday morning to file the paperwork to get President Donald Trump on the first-in-the-nation primary ballot.As Pence arrived to the New Hampshire State House, he was met with crowds chanting, “Four more years!”The chants continued as he made his way through the hallways to the secretary of state’s office where the formal filing occurred.The vice president smiled at the crowd and said that Trump told him to relay a message, “Tell them we’re going to win!,” he yelled.During Fox Nation’s inaugural Patriots Awards dinner on Wednesday, the vice president also spoke about the trip to New Hampshire, stating, “I couldn’t be more honored that President Trump asked me to go to New Hampshire and go to the statehouse and file papers for his reelection as president of the United States. We wanted to go to New Hampshire and file those papers as past vice presidents have had the privilege of doing.”For a candidate to be added to the ballot, a candidate, or a representative, must fill out a form, pay a $1,000 filing fee, and submit it to the New Hampshire secretary of state’s office.It is common for a sitting U.S. president to send a surrogate to file on their behalf. New Hampshire Secretary of State Bill Gardner, who has been the secretary since 1976, told ABC News that Hillary Clinton filed for her husband, President Bill Clinton, for his second term, and Vice President Joe Biden filed on behalf of President Barack Obama in 2012.Trump won the New Hampshire Republican primary in 2016, but narrowly lost the state to Hillary Clinton in the general election.President Trump will face several primary challengers in the granite state; former Massachusetts Gov. Bill Weld, former Illinois Rep. Joe Walsh and former Gov. Mark Sanford.Two of the president’s challengers are slated to file for the primary next week: Weld will file on Nov. 13 and Walsh on Nov. 14. Sanford has not said when he will file, but the deadline to do so is Nov. 15.Several Trump supporters who lined up outside the New Hampshire State House waiting for the vice president’s arrival said they were eager for the president to be on the ballot again.Betty Yobaccio, the first supporter to arrive to the filing Thursday morning, told ABC News, “We are so excited to be here to have an opportunity to meet Vice President Mike Pence and show our support for President Trump,” she continued, “I would like him to Keep America Great!””He tells it like it is and that’s what the American people need to hear. No more of this fake news, no more of this phonies. He is right to the point,” supporter Helen Smith said. Copyright © 2019, ABC Audio. All rights reserved.