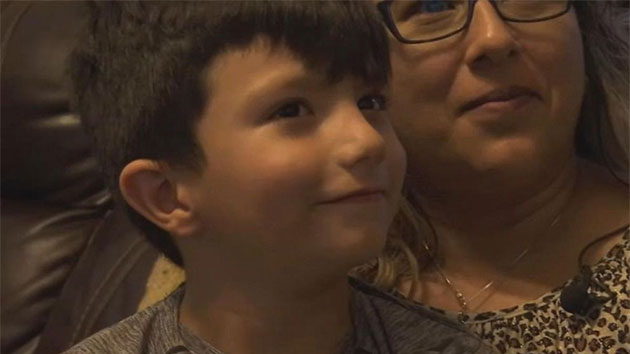 ABCNews.com(HOUSTON) — A young boy is being hailed a hero after his quick thinking helped save his mother’s life.Chelsie Montemayor was unresponsive last Friday due to dangerously low blood sugar and her 5-year-old son Benjamin called his grandmother when he noticed something was wrong.”He was crying, he was screaming. ‘Memaw, please help me,"” Marciela Torres, Benjamin’s grandmother, told ABC News Houston station KTRK.Torres said she called Benjamin’s father, who was already out of the house for the day at work, and he called 911.”Honestly, I don’t remember anything,” Montemayor, Benjamin’s mother said. “If he would not have called for help, I would’ve been dead.”Torres arrived to their home shortly before the paramedics, according to KTRK, and found her daughter unresponsive in her bedroom.”I just woke up with a whole bunch of paramedics around me,” the mother of two said.”They checked her (blood) sugar (level) and it was 39, which is way too low,” her mom said. “They gave her something to get her sugar up and she started coming to.”Now, Montemayor has started to slowly feel better and said she hopes this serves as a reminder to teach children what to do in an emergency.”Teach your kids, even if you have to put an emoji by someone’s name or different colored hearts by certain people’s names so they know if there’s an emergency, this heart will call dad, this heart will call grandma,” she said.

Billie Eilish opens up about having Tourette’s syndrome: ‘I have made friends with it’

With Roe under threat, doctors worry about girls under 18 who may need abortion care