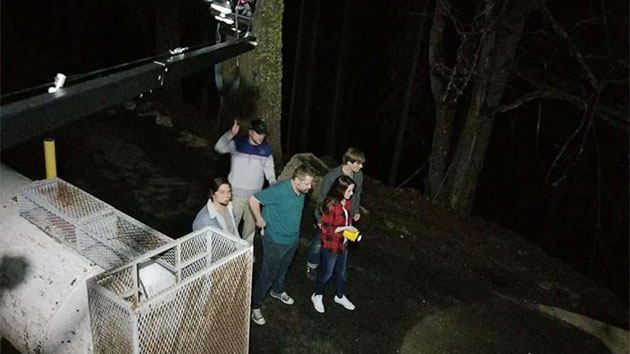 Siskiyou Productions(JACKSON CITY, Ore.) — An actress, who plays a murderer in a low-budget horror film, is accused of life intimidating art as she awaits trial for shooting her uncle to death.Asling “Tucker” Moore-Reed was released on bail after she was arrested for shooting her July 2016 manslaughter of Shane Moore in Jackson City, Oregon. Moore-Reed went on to audition for the leading role of “From the Dark” under the pseudonym “Wyn Reed.”Moore-Reed, 30, landed the leading role as Valerie Faust in the “rural murder-thriller” about a tour guide’s last day at work in the isolated mountains where things go wrong. In the film Faust also shoots someone to death.As the movie was filming from April 2018 to July 2018, the investigation into the 63-year-old man’s death continued. Moore-Reed’s defense team handed over her cellphone with a video she recorded of the encounter with Moore in order to provide evidence of self-defense, according to the Washington Post.After the shooting, Moore-Reed hysterically cried “I didn’t mean to shoot him in the chest,” according to the over three-minute video originally posted by The Oregonian.Moore-Reed’s mom, Kelly Moore, is a former California lawyer and also told the Washington Post her daughter acted in self-defense.The Oregon-based production company, Siskiyou Productions, tells ABC News that they found out her real-life murder case on July 23, 2018 — the day after they wrapped on “principal photography.”Because of the lack of the production company’s funds, Moore-Reed was not paid for her participation in the film and they did not conduct any background check on her.The production company said they “believed her story and felt for her deeply” when they heard her self-defense claim. But, once they saw the cellphone footage that caused the charges to get upgraded to murder, the production company’s “perspectives changed.”A trailer for “From The Dark” was released on Oct. 31 after the production company addressed the news about Moore-Reed.“We need to clear the air about some rumors that have been going around,” Siskiyou Production tells ABC News. “Our lead actress is currently facing a legal battle that we were not made aware of until after filming had wrapped. Since then we have been struggling with how to approach this unfortunate situation.”Moore-Reed is currently being held without bail and her trial is set for December. Copyright © 2019, ABC Audio. All rights reserved.