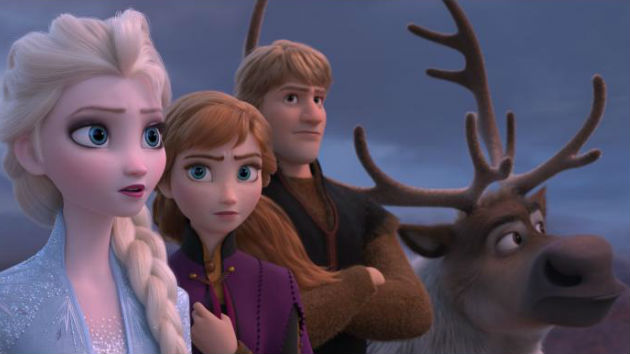 Disney(NEW YORK) — Hard to believe America first fell in love with Frozen six years ago.  Now, in just a few short weeks, its long awaited sequel finally arrives in theaters and aims to answer questions that were left unresolved in the original movie, such as the mystery surrounding Queen Elsa’s powers.

Thursday was the red carpet premiere of Frozen 2 and ABC News caught up with stars Kristen Bell, Idina Menzel, and Jonathan Groff — who play Anna, Elsa, and Kristoff, respectively — in hopes to squeeze some new information about the highly anticipated film out of them.

While the actors remained tight lipped about details surrounding the plot, Menzel divulged a little about what’s in store next for Elsa.

“In the first movie she was fearful and ashamed that she might endanger the people that she loved with her powers,” She began before excitedly revealing, “And in this movie, there’s a sense of her that really wants to step into her power and own it.”

Elsa wrestled with her powers in the first film and came to fear them after her parents urged her to conceal them, even from her little sister Anna.  Bell, who plays Anna, revealed that Frozen 2 confronts the “mistakes that their families made” which “affects the future of their kingdom.”

She also promises the film is full of “uncharted territory.”

Groff, who plays Anna’s romantic partner Kristoff, eagerly revealed that Frozen 2 pushes the main characters in a completely new direction.  “The filmmakers did a beautiful job of evolving the character like, reminding you why you loved the characters and then taking them to places that, even as a person that was in the movie, were completely surprising to me,” he gushed.  “Its a beautiful film.”

Frozen 2 arrives in theaters November 22.  Disney is the parent company of ABC Audio.