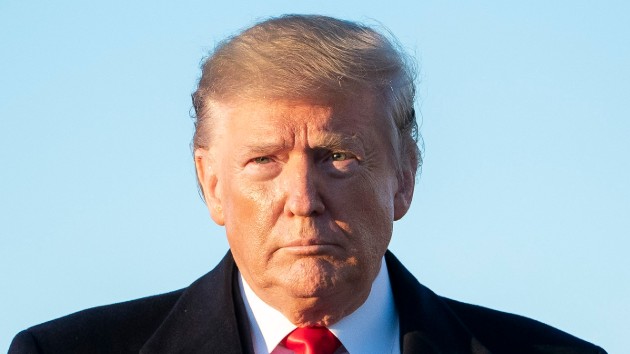 Official White House Photo by Tia Dufour(WASHINGTON) — Commerce Department officials knew that a tweet from a National Weather Service office in Alabama contradicting assertions made by President Donald Trump about the danger Hurricane Dorian posed to the state were not an attempt to contradict the president according to emails released under the Freedom of Information act.On Sept. 1, at 3:51 p.m., Trump tweeted that Alabama would “most likely be hit (much) harder than anticipated. Looking like one of the largest hurricanes ever.”Shortly after, at 4:11 p.m., @NWSBirmingham, the official account of the National Weather Service office in the Alabama city tweeted: “Alabama will NOT see any impacts from #Dorian. We repeat, no impacts from Hurricane #Dorian will be felt across Alabama. The system will remain too far east. #alwx.”This exchange prompted Susan Buchanan, director of Public Affairs for the National Weather Service, to email Weather Service and National Oceanic and Atmospheric Administration (NOAA) officials on Sept. 2: “I wanted to let you know that the forecasters in Birmingham who made the clarification post for Alabama was unaware of the POTUS tweet when they made their post.”“They had started getting a lot of calls from partners and the public out of the blue, asking about the hurricane and local impacts,” she said.Another Weather Service official, Chris Darden, the meteorologist who ran the agency’s office in Birmingham, noted in a Sept 1. email to Weather Service officials, including Buchanan:“Some in [the] media assumed, understandably so, that our social media posts were a direct response to the [White House] post. In fact, they were not as we were not even aware of them at the time. It was directly in response to the increase in calls from anxious and panicked citizens and core partners.”Despite being appraised of the reasons for the Birmingham office’s tweet, the NOAA released an unsigned statement on Sept. 6, saying “the information provided by NOAA and the National Hurricane Center to President Trump and the wider public demonstrated that tropical-storm-force winds from Hurricane Dorian could impact Alabama.”The statement went on to admonish the National Weather Service office in Birmingham for their Sept 1. tweet, saying that it “spoke in absolute terms that were inconsistent with probabilities from the best forecast products available at the time.”ABC News reported on Sept. 11 that Acting White House Chief of Staff Mick Mulvaney directed Commerce Secretary Wilbur Ross to reach out to the National Oceanic and Atmospheric Administration and “correct the record,” in relation to Trump’s assertions.The newly released emails reveal that the NOAA statement resulted in a barrage of angry responses from members of the public. In a Sept. 7 email, Buchanan wrote the National Weather Service public affairs workers were “receiving a lot of angry/hate mail and phone calls on our cell phones about the statement NOAA released yesterday.”Examples of the angry communications received by the NOAA were also included in the emails. One, forwarded by NOAA official Benjamin Friedman to other officials, read: “You may have [an] undergraduate degree in science but apparently you think the scientific method includes doing whatever carrot top tells you to do. Pathetic.”

Friedman observed while forwarding the email: “These are getting very personal.”Other emails were supportive of the NWS, with one Sept. 7 message from a member of the public reading: “I’m appalled at the statement released by NOAA criticizing your office for DOING YOUR JOB of providing the best possible information to the public.”Copyright © 2019, ABC Audio. All rights reserved.