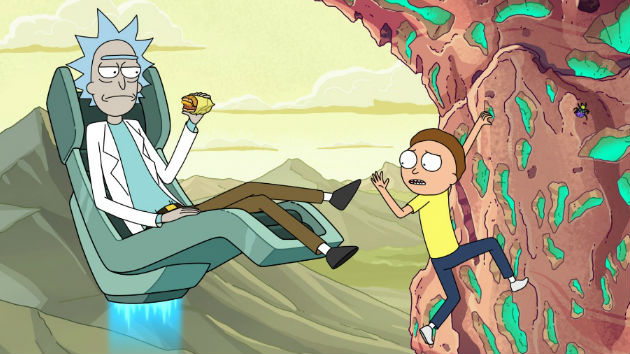 For the uninitiated, the show stars the voices of co-creator Justin Roiland as both lead characters: Rick, a brilliant sociopathic, substance-abusing scientist, and Morty, his awkward grandson, whom Rick drags along on on inter-dimensional adventures across space and time.

In past episodes, the pair have saved the planet from an American Idol-like show in which a species of giant alien heads vaporize the planet of the losing finalists, and in one of the show’s more “grounded” episodes, Rick turned himself into a pickle just to avoid a family therapy session.

Chris Parnell plays Morty’s “sad-sack” of a dad, Jerry. He calls Roiland a “genius,” and says he’s constantly floored by what Roiland and co-creator Dan Harmon and their writers come up with.

“They’re amazing,” the Saturday Night Live and Archer veteran says. “With Rick and Morty, you know, they can go anywhere in the universe. They’ve set up such a great premise. You’ve got a family there that you can relate to…however dysfunctional they may be, and then they can go off to other dimensions where you can do anything you can imagine.”

Parnell says of his character, “[H]e’s a bit of a loser. He generally means well, but yes, he’s a little pitiful, you know. He generally tries to do the best he can, I think. But that’s that’s not amazing. He does love Beth and he cares about his kids. He resents Rick a lot, understandably. Yeah. He’s a fun guy to play.”

Five episodes of season four will roll out this year, starting with Sunday night’s “Edge of Tomorty: Rick Die Rickpeat.” The show centers on the pair’s recovering fate-predicting crystals from a remote planet — and the consequences of Morty’s swiping one.