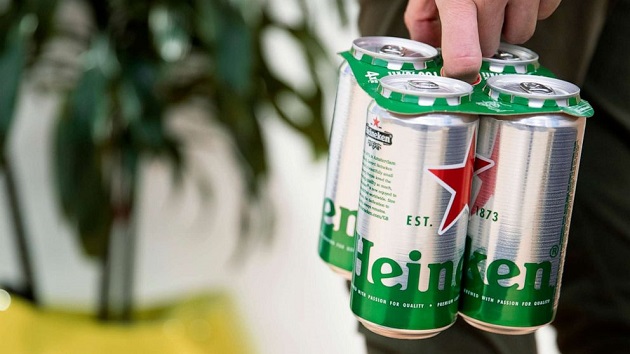 Heineken/ABC News(NEW YORK) — Brewing giant Heineken has become the latest beer firm to replace the plastic “six-pack rings” with an environmentally friendly alternative in a bid to reduce plastic pollution.

The firm will replace the plastic rings, which hold multiple cans together, with a “topper” made from recycled cardboard and will eliminate the use of shrink-wrapping from its packaging in the U.K. market, moves it claims will eliminate 517 tons of plastic annually from its supply chain.The change will roll out across some of the brewer’s brands starting April 2020, and will encompass all of its brands by the end of 2021 and see it invest £22 million ($28 million) in the project.“The effect single-use plastic is having on our planet can’t be ignored. Creating an eco-friendly solution that eliminates plastic while still meeting the demands of our beer and cider drinkers has been a big focus in our business,” Cindy Tervoort, U.K. marketing director of Heineken, said.Rising plastic pollution, particularly in the oceans, is an increasing concern for environmentalists and consumers.Scientists have documented 700 marine species, including seabirds, sea turtles, whales and dolphins that have been affected by plastic pollution, according to Greenpeace USA.The six-pack rings, a staple of the beverage packaging industry for decades, have been a particular focus of environmentalists’ ire over incidents of wildlife becoming trapped in them resulting in injury or death.As far back as 1984, the New York Times reported on a conference of environmental and marine wildlife conservation groups that revealed two million sea birds and 100,000 sea mammals died from becoming entangled in plastic nets or from eating plastic.In 1994, the Environmental Protection Agency mandated that all ring carriers sold in the U.S. must be degradable, but those rings can still take months to degrade.Heineken is not the first brewer to introduce environmentally friendly alternatives to the six pack ring. In 2018, Danish brewer Carlsberg announced it would replace six-pack rings with recyclable glue and one Florida beer company developed can holders that marine animals could eat.Copyright © 2019, ABC Audio. All rights reserved.