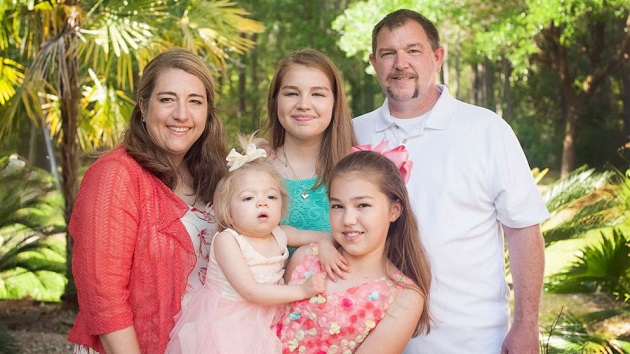 United MSD Foundation(NEW YORK) — There is not enough time in the day for Amber Olsen.An average day for this mother means working as a business owner of the staffing company, Nextaff Gulf Coast, taking care of her two teenage daughters and finding a cure for her youngest daughter, Willow, who has a rare genetic disease. Now 6 years old, Willow has been diagnosed with multiple sulfatase deficiency and is not expected to live past the age of 10.Olsen has made it her mission to find a cure for this life-threatening illness, if not to save her own daughter then to help give other families a fighting chance.

Signs of regressionWillow was born Aug. 21, 2013, after a healthy pregnancy.She was a happy baby who loved getting kisses from her two older sisters and her parents.Amber, now 44, noticed that Willow was delayed when it came to milestones such as crawling and walking.“I just kind of have that mama instinct,” Olsen told ABC News’ Good Morning America. “She could walk and run, but she walked like Frankenstein … with her arms out and stuff.”After taking Willow to a neurologist, the family learned that she was showing signs of regression, and eventually lost the ability to walk and move anything except her hands.Through genetic testing, they learned that Willow had multiple sulfatase deficiency, a rare, inherited lysosomal storage disease, where the body is unable to rid itself of cellular waste.”Multiple sulfatose deficiency is an ultra rare disease that affects kids from birth,” Rebecca Ahrens-Nicklas, assistant professor of pediatrics at The Children’s Hospital of Philadelphia’ told GMA. “Basically, it can affect all parts of their body where it causes buildup of material that are clear in our body. When these materials build up, they can cause damage to all different parts of your body.”This disease tends to affect the brain the most.When doctors first told Olsen about her daughter’s diagnosis in 2016, they expressed that there wasn’t a real treatment or cure.“There’s nothing you can do [except] take her home and be with her, and just try to keep her comfortable, and she will die,” Olsen said.It has been estimated that there is currently 50-75 kids in the United States that are currently living with MSD, according to Ahrens-Nicklas, and there is no official cure.Nicklas says the Children’s Hospital of Philadelphia is currently trying to find every child in the United States who has MSD to conduct a study of the disease.”Because it’s such a rare disease, it’s somewhat variable also,” Ahrens-Nicklas said. “We estimate that the life expectancy in good medical care today is between 10-20 years, but we honestly don’t know and it is incredibly variable.”

On a mission to find a cureShortly after she was diagnosed, Willow went back to crawling and then she reached a point where she couldn’t move at all. She had to move around in a walker.Willow’s mother compared the disease to Alzheimers because of the changes that the person goes through, and how difficult it can be “having to adapt and kind of be on unstable ground.”Willow cannot speak, but her parents know she is still cognitively processing everything around her.“You can see the spark in her eye,” Olsen shared. “She smiles, she laughs, so, you know she’s still there but has a lot of issues.”Olsen is devoted to making her little girl happy. She even shares a special morning routine with her daughter where she does “Superman” stretches with her to help move her limbs.So when she learned the devastating news about her daughter’s diagnosis, she was not going to sit and watch her health fade away. If no one knew of a cure, she was going to find it herself.She immediately Googled other parents who had children with the same condition and came across a couple in Ireland, Alan & Michelle Finglas, who had created the MSD Action Foundation, inspired by their own son, Dylan, who had MSD.”When we met the dad, he said, ‘We just need time and money. It’s a single gene disorder. There is science out there that could save these children, so we have to band together and work together,"” Olsen shared.She and her husband flew back to Europe shortly after that to meet with scientists, who told them that in order to find a treatment, they needed to gather the funds.This inspired Olsen to start fundraising and researching the disease more.“I’m not a doctor or a nurse and I never knew anything about medical stuff,” she said. “It was a huge learning curve in a very quick amount of time.”

Raising $3 millionJust a few months after Willow’s diagnosis, her mother created United MSD Foundation, a nonprofit organization that would work towards funding research to create a clinical trial to help children like Willow suffering from MSD.The organization’s goal was to raise $3 million for pre-clinical research, manufacturing of medicine and Phase 1 of the clinical trial.Olsen helped established a scientific advisory board, put out a request for research proposal and recruited Dr. Steven Gray, associate professor of pediatrics at UT Southwestern Medical Center, to be their lead researcher in the field of gene therapy to develop a treatment for MSD.She says her biggest challenge has been driving this organization as someone “who is not a medical professional.”Despite the fact that she “flunked biology” when she was in grade school, Olsen takes classes in genetics and science to understand the research work for MSD.She is committed to doing everything she can to help Willow.

Willow’s legacyWith the help of scientists and volunteers, the United MSD Foundation has raised over $2 million within two years and is currently about $620,000 away from its goal to fund a gene therapy clinical trial for children.Olsen believes that if her daughter cannot be saved, at least she has the opportunity to save the lives of others.“We all want to grow up and go to school and get married and have children, so we make a difference in the world, and she doesn’t have … very many of those opportunities,” Olsen said. “I just think that’s so important … you know her legacy.”Through the grueling hours of phone calls, research and worrying, the mom has learned to cherish the little moments.“[Willow’s] giggling about something that I was doing with her … and we’re all excited that she just laughed,” Olsen said. “It’s those little moments that I think we see and take advantage of more, way more, than we used to, and kind of slow down and appreciate that.”