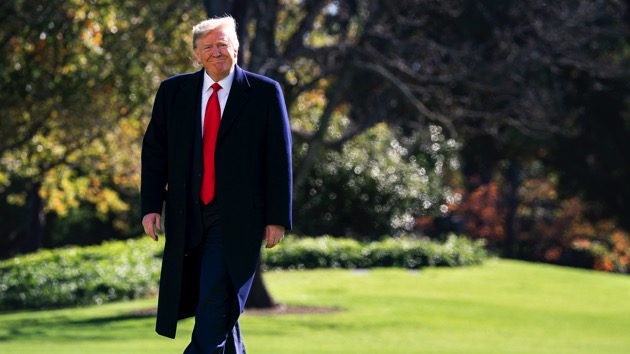 Official White House Photo by Tia Dufour(WASHINGTON) — President Donald Trump on Friday said he’d be “happy” to run against fellow billionaire Michael Bloomberg amid reports he was close to entering the Democratic race for president.”I’d be happy. There’s nobody I’d rather run against than little Michael,” Trump told reporters as he left the White House for a trip to Georgia.“He’s not going to do well but I think he’s going to hurt Biden actually,” he said, referring to former Vice President Joe Biden.”I’ve known him for a long time. He’s said a lot of great things about me,” he continued.”He’ll spend a lot of money. He doesn’t have the magic to do well. Little Michael will fail.” Trump said.ABC News confirmed Thursday that the former New York City mayor was eyeing a presidential bid.Bloomberg was planning to submit his name for the Democratic presidential primary in Alabama on Friday, the deadline to do so.He has not decided whether to run for president but is back to actively considering it and is taking this step to keep his options open, ABC News reported.Copyright © 2019, ABC Audio. All rights reserved.

Mark Kelly and Blake Masters set to debate in Arizona: When to watch, what to expect