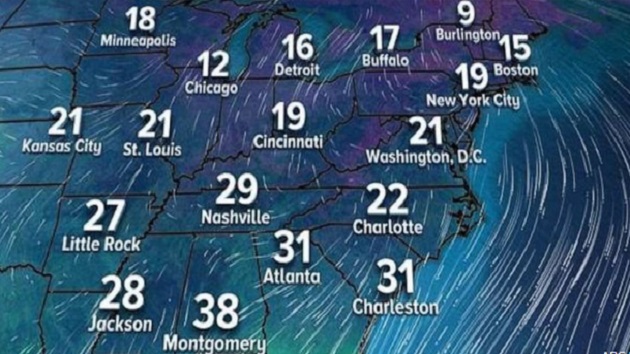 ABC News(MIAMI) — A significant blast of cold air by November standards is dominating the eastern half of the country on Saturday morning — but it is only a tease of the arctic blast of air coming next week.Temperatures feeling closer to December or January in the Northeast on Saturday morning with wind chills in the teens from New York City to Boston. Actual low temperatures will approach daily cold records. It feels like the teens Saturday morning in the Midwest, with Chicago seeing a wind chill of 12, and Detroit a wind chill of 16.The cold reaches all the way into the Deep South, with wind chills in the 20s and 30s from Mississippi to South Carolina.By Tuesday, an arctic blast will overtake much of the central U.S. with widespread wind chills in the single digits. There will be little daytime recovery in temperature and therefore a large swath of the country, from Texas to New York, could see potential record-cold high temperatures during the daylight hours. Temperatures in this region will be nearly 30 degrees below average.Brutal cold will move into the Northeast on Wednesday. Wind chills will be in the single digits — more typical of January than November. On Nov. 1, less than two weeks ago, it was 71 degrees in New York City.Snow will begin to develop in parts of Montana and the Dakotas on Sunday. Late Sunday and Monday, snow will move into the Central Plains and parts of the Midwest. In particular, parts of Interstate 80 could see snow overnight Sunday into early Monday. Chicago could see shovel-able snow as well.Snow will like extend from as far south as Arkansas and to New York state by late Monday, with possible heavy snow in parts of Ohio and western Pennsylvania.As the frontal system clears the coast by Tuesday, rain will change to snow in parts of the Northeast and it appears that some of the big cities, from Washington, D.C., to New York and Boston, will have a chance at seeing some flakes.Additionally, as cold air races over the warm Great Lakes, lake effect snow will ramp up while there could be significant lake effect snow next week as well.The results of this frontal system and the cold air quickly surging in will bring 1 to 3 inches of snow to Chicago, with pockets of 3 to 6 inches or greater across parts of Indiana, Michigan and Ohio through Monday. On Tuesday, there could be 6 inches of snow in parts of New York state, some of it lake effect-enhanced. Snow could pile up along the Canadian border and across Northern New York and Vermont. Copyright © 2019, ABC Audio. All rights reserved.