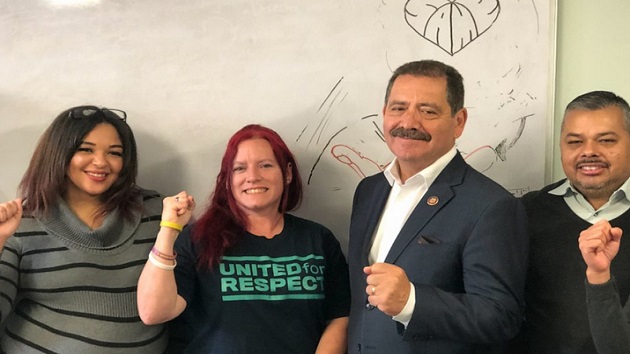 The Office of Congressman Jesus Garcia(NEW YORK) — Since Forever 21’s bankruptcy announcement — where up to 178 brick and mortar locations across the country were expected to close — hundreds of former and current employees are taking matters into their own hands to protect themselves.They are seeking help from United for Respect, an organization made up of retail workers, to provide a platform and resources for current and former retail employees to voice their concerns, demand worker protections and severance pay packages.Following the organizations successful Toys “R” Us campaign, its employees received a $20 million financial assistant fund from the company’s former private equity owners. The big box toy store declared bankruptcy in 2018.”When they (Toys “R” Us employees) found out stores were closing many of them found out from other sources, they were left in the dark they decided to come together and take local action that led to this fund,” said Esperanza Fonseca, national deputy organization director for United for Respect.Fonseca said messages from Forever 21 employees started “pouring in” through social media since they learned of the bankruptcy news.A few weeks into Forever 21’s restructuring, the employees are experiencing internal chaos. “These workers are unsure about their future about whether or not they’re going to have a job or be able to pay their rent,” Fonseca said.The first time April Jackson and her co-workers at a Skokie, Illinois, location heard the news that Forever 21 was filing for Chapter 11 was through the news.Jackson, 31, said it came as a shock as they weren’t “getting any information from the company, zero.” The only hint Jackson and her team received that their location would close was a sudden halt of fall and winter items shipments, Jackson told ABC News.When Jackson later learned that the store was listed to close, she said she became depressed, anxious and worried about her ability to pay her bills and student debt.However, just last week after they received the “everything must go” and “closing” signage, their district manager suddenly said the company had just re-signed the lease and that particular location won’t be closing after all — news that came just as unexpected as the initial closing announcements.Concerned over the uncertainty and the terms and conditions of the lease, Jackson said “A lot of things aren’t adding up. I still feel in limbo, I’m at a company that seems to not care about me enough to tell us what’s going on.”Jackson, along with other retail workers from Payless, Kmart and Sears, sat down with Congressman Jesus Garcia (IL-04) of Illinois’s 4th congressional district to discuss worker protection legislation.The number of major retailers declaring bankruptcy has been growing in recent years. In addition to shifts in consumer behavior, Congressman Garcia believes the record breaking store closures is largely due to the “impact of the negative roles of private equity in retail services area.”As a member of the U.S. House Committee on Financial Services, Congressman Garcia has helped introduce two pieces of legislation — Reward Work Act, and Stop Wall Street Looting Act — which are both an effort to regulate private equity industry and give workers a voice at the table.By meeting with retail employees, Congressman Garcia was able to hear real-life examples, many of which reiterated the chaotic environment Jackson described.”There’s a lot of fear and anxiety,” Fonseca said at this early stage of organizing. United for Respect’s goal is to connect these employees with each other and draft their demands.At the roundtable, Congressman Garcia talked about two Payless workers, who both worked for the company for over 20 years and were looking forward to retiring, but were given “crumbs from what was left from the bankruptcy.”Another Forever 21 employee, Chris Angelo recounted a similar story where the store he was working as a visual merchandiser suddenly announced its closure and even shut down a few days earlier than expected. Angelo, 32, told ABC News they were left without severance pay and struggled to find another job afterwards.Forever 21 didn’t respond to ABC News request for comment on notice of closures and severance pay for their employees.Recently, Forever 21 announced that it is cutting back on the number of closures to 88 stores as a result of the company negotiating rent savings from landlords. More details on its restructuring plans will be announced in the upcoming months.Until then, Jackson will keep sharing her experience, “If telling our stories is what I can do then I want to use my voice as a tool.” Copyright © 2019, ABC Audio. All rights reserved.