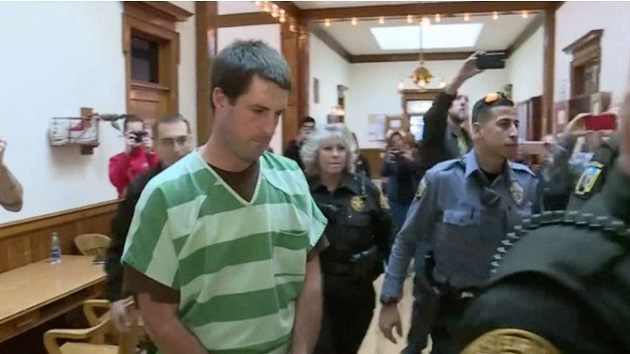 ABC News(WOODLAND PARK, Colorado) — At the trial of a Colorado man accused of killing his fiancee, the defendant’s close friend took the stand on Friday, bringing bombshell testimony about alleged behavior before and after his fiancee vanished.Prosecutors allege that Patrick Frazee attacked Kelsey Berreth with a baseball bat at her Woodland Park, Colorado, home on Thanksgiving Day 2018 while the couple’s 1-year-old daughter, Kaylee, sat in a playpen in a back room.Prosecutors allege Frazee put Berreth’s body in a black plastic tote and burned it on his property.The 29-year-old’s body hasn’t been found.When Frazee’s friend, Joe Moore, took the stand on Friday, Moore testified that Frazee was acting so odd in early 2018, months before Berreth’s alleged killing on Thanksgiving, that he started taking notes.Moore testified that on April 26, 2018, he asked Frazee about Berreth, and Frazee replied, “I’ve figured out a way to kill her,” adding, if there’s “no body,” there’s “no crime.”Frazee’s ex-girlfriend has testified that Frazee had several prior plots to kill his fiancee, including asking the ex-girlfriend to poison Berreth’s favorite Starbucks drink.After Berreth had vanished, Moore testified that Frazee claimed: “Why are they even investigating this? If there’s no body, there’s no crime. Why are they even after me?”On Dec. 20, weeks into national news coverage of the missing young mom, Moore testified that Frazee said he did not understand why Berreth’s case was getting so much attention since people go missing every day.Moore told the jury that Frazee had said: “If I had known it was gonna be this big I never would have…”. According to Moore, Frazee then stopped talking.Moore, overcome with emotion, said on the stand, “You don’t want to picture somebody you’ve known for so long and have trusted… you don’t want to think he could do something like this.”Frazee was arrested in December and charged with first-degree murder. His trial began last week.Frazee’s ex-girlfriend, Krystal Kenney Lee, testified Thursday that Frazee called her to come to Berreth’s house where she cleaned up the bloody scene.She said she “saw blood all over the floor and blood all over the wall. … There was blood on the front of the stove and the dishwasher, and on the floor there were bloody footprints.”Lee, who has admitted to disposing of Berreth’s phone, has pleaded guilty to tampering with physical evidence. She is awaiting sentencing once Frazee’s case concludes.During cross-examination Thursday, public defender Adam Steigerwald recounted the three times that Lee came to Colorado at Frazee’s behest when the defendant allegedly wanted her help killing Berreth. The public defender pointed out that if Lee had been charged with attempted murder and if convicted, she could have faced decades in prison.Instead, prosecutors allowed Lee to plead guilty to moving Berreth’s phone, and now her worst-case scenario is three years in prison, the defense stressed.Lee began to cry on the stand as Steigerwald repeatedly got her to admit that, even though she drove from her Idaho home to Colorado multiple times when Frazee allegedly wanted her help killing Berreth, she never took her suspicions to Berreth’s family, her own family or police.”You were looking at essentially the rest of your life in prison,” Steigerwald said. “Instead, the district attorney allows you to plead guilty to moving Kelsey Berreth’s cell phone.””Your worst-case scenario is three years in prison, correct?” Steigerwald asked. “You could get probation with no jail.””Yes,” said Lee, through tears.The defense has also pointed out that the victim’s body and the murder weapon have never been found. Copyright © 2019, ABC Audio. All rights reserved.