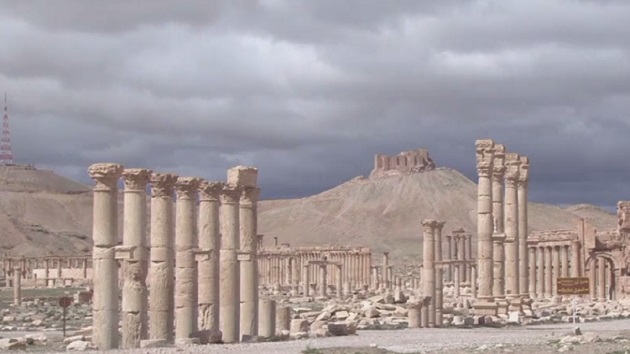 ABC News(WASHINGTON) — The U.S. Army Reserve and the Smithsonian are partnering to establish a modern-day “Monuments Men” program, reviving a cultural preservation effort that has its roots in World War II. The “Monuments Men” were 345 service members who worked from 1943 to 1951 to track down and recover 5 million pieces of art, books and other valuables — most of which had been stolen by the Nazis during the war. Their work was featured in “The Monuments Men,” a 2014 movie starring Matt Damon, Bill Murray and George Clooney.”To safeguard these things will not affect the course of battles,” George Stout wrote in a draft proposing the protection of monuments to the U.S. government in 1942. “To safeguard these things will show respect for the beliefs and customs of all men and will bear witness that these things belong not only to a particular people but also to the heritage of mankind.”In October, the Smithsonian Cultural Rescue Initiative (SCRI) and U.S. Army Civil Affairs and Psychological Operations Command at Fort Bragg signed an agreement to train service members in cultural preservation. The partnership provides military support to respond to threats to cultural heritage seen in major conflict zones, as needed, including the Middle East and northern Syria.”ISIS, the Taliban, extremists, what they’ll do is they’ll target cultural heritage to divide, and they use that as a political tool. The same as what happened in World War II,” said Army Reserve Col. Scott DeJesse, a cultural heritage staff officer who served tours in Iraq and Afghanistan.”Culture can either separate us or it can unite us. If used incorrectly it can separate people,” he added.In 2015, the Islamic State released a video that showed militants using sledgehammers to destroy artifacts in Iraq’s Mosul Museum. The same year, ISIS took hold of Palmyra, a UNESCO World Heritage site in Syria, and blew up one of the city’s biggest tourist attractions, the 1,900-year-old Temple of Baalshamin.”It’s basically saying we don’t care about these things because it’s our version of history that we want to support,” said SCRI Director Corine Wegener, a former Arts, Monuments, and Archives Army Reserve officer. “If you want to wipe out people, you also need to wipe out their existence.”Wegener served several military deployments, including at the Iraq National Museum. She explained that strategic destruction and looting has historically been used to erase national identity and control narratives. She cited examples of this seen during the Bosnian War, in acts of terrorism from present-day ISIS and its affiliates and, of course, throughout World War II during the Holocaust.”When you’re targeting cultural heritage, in some ways you’re also targeting the people that the cultural heritage is linked to,” Wegener said.The soldiers with the Monuments, Fine Arts, and Archives Section during World War II were made up of accomplished museum directors, curators, art historians, archivists, architects, educators and artists. They braved the front lines to save cultural treasures from war-torn Europe and recover what was stolen by the Nazis. Two of the soldiers were killed in combat protecting works of art, according to the Monuments Men Foundation. In the aftermath of World War II, these soldiers also organized temporary art exhibitions and music concerts in an attempt to restart cultural life in Europe and Japan, according to the Monuments Men Foundation.While the purpose of the modern-day Monuments Men will be similar to what Stout — one of the first Monuments Men to go ashore at Normandy, France — proposed, the actual missions should look remarkably different.Based at Fort Bragg in North Carolina, traditional Reserve officers who enter the program will become military government specialists under the Civil Affairs officer branch. These technical experts will use their civilian skills in a military context, according to a news release from the Army Reserve. This new partnership with the Smithsonian establishes a specialization in art preservation.Training begins in March. A small group of Reserve officers will provide training and identify sites of cultural significance to take into consideration, with the guidance of the Smithsonian, to avoid collateral damage of cultural heritage sites from military operations.The ultimate goal, Wegener said, is to stabilize locations so that the host nations could take over. DeJesse said the American effort will include encouraging other countries benefiting from the program to “be their own Monument Men.””It’s not up to us to decide what is valuable to them, the best thing is that they do it,” he said. “It builds social cohesion that helps push towards stability and peace in the area.”Separately, the Smithsonian has led cultural rescue projects with academic institutions.In 2014, the Smithsonian organized an emergency workshop as part of the Safeguarding the Heritage of Syria and Iraq (SHOSI) project, providing equipment for workshop participants to secure objects in the Ma’arra Museum, which houses some of the most important collections of Roman and Byzantine mosaics in the Middle East. When a barrel bomb severely damaged the museum in June 2015, the supportive barriers held, protecting the mosaics and preventing the walls from collapse.The Monuments Men revival also has the potential to extend beyond military threats and assist during environmental disasters. In 2010, the Smithsonian Cultural Rescue Initiative saved approximately 35,000 cultural treasures after an earthquake devastated Haiti.”These monuments are not merely pretty things, not merely valued sign of man’s creative power,” Stout wrote in 1942. “They are expressions of faith, and they stand for man’s struggle to relate himself to his past and to his God.”