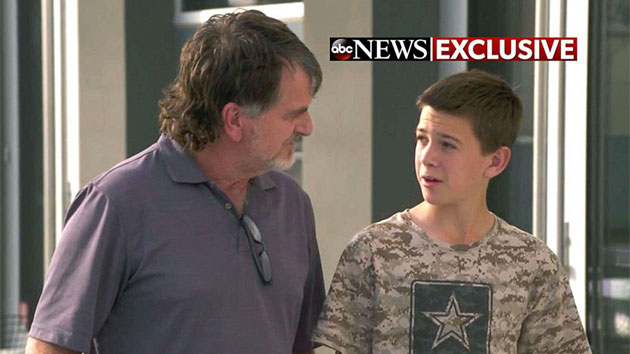 ABC News(NEW YORK) — An American father who lost his wife and two young sons in an ambush in Mexico last week spoke out for the first time in an exclusive interview with ABC News over the weekend, sharing his heartbreak and the difficult decision he’s just made to pull his family out of that country. “So now it’s my whole life has turned upside down. Not only have I lost a wife and two children, but I’m having to move the rest of my family with really no place to go at this point,” David Langford said in a tearful interview airing on “World News Tonight” Sunday. “I believe in forgiveness, but I also believe in justice and forgiveness doesn’t rob justice. You don’t get justice too much in Mexico.”Langford’s 13-year-old son, Devin, was hailed as a hero in the wake of the horrific Nov. 4 attack in northern Mexico that claimed the lives of nine women and children, including his 43-year-old wife Dawna Langford, and his two boys, Trevor Langford, 11, and Rogan Langford, 2.The family was ambushed by an armed group while traveling from the town of Bavispe in Sonora state to Galeana in Chihuahua state between 9:30 a.m. and 1 p.m. local time, according to Mexican authorities. The family members were U.S. citizens but lived in a Mormon community, called La Mora, in the Mexican border state of Sonora.The area where the attack took place — less than 100 miles from the Arizona border — is of territorial dispute by several cartels, and it’s possible the family’s convoy of cars was mistaken for one of them, authorities said.

EXCLUSIVE: David Langford, who lost his wife and two sons in the Mexico ambush, tells @TomLlamasABC in an @ABC News exclusive about his 13-year-old son, Devin, who survived and walked miles to find help. “He’s really a hero.” More tonight. https://t.co/7qlZBMQHbg pic.twitter.com/Wkcduy2TNt

— World News Tonight (@ABCWorldNews) November 10, 2019 Devin, who was unharmed in the ambush, walked about 14 miles to La Mora to seek help after hiding his injured siblings in the bushes and covering them with branches. Devin said the suspects had long guns and wore vests. He offered details about the harrowing experience in an exclusive interview airing on “Good Morning America” Monday morning.”Every one of my children that survived that are living miracles,” Langford said. “How many bullet holes were fired into that vehicle … at that horrific scene and how many children were involved. It’s amazing. It’s amazing. It’s beyond amazing that they survived.”Langford said there’s no doubt in his mind that Devin is a hero.”To be honest with you, my boy’s a hero simply because he gave his life for his brothers and sisters,” he said.One of the family’s vehicles, a Chevrolet Tahoe, was found burned with the charred bodies of Rhonita Maria Miller, 30, Howard Jacob Miller Jr, 12, Krystal Bellaine Miller, 10, Titus Alvin Miller, 10, and 8-month-old twins Titus Alvin Miller and Tiana Gricel Miller, authorities said. They were all shot in addition to being burned.Another vehicle, a white Suburban, was discovered about a mile away from the border between Sonora and Chihuahua states, with a woman’s body found a few feet away from the SUV, according to authorities. Christina Marie Langford Johnson, 29, was found shot dead.Langford’s wife and sons were found nearby in a white Chevrolet Suburban with fatal gunshot wounds. Langford says more and more evidence is showing the killers were cartel hit men — a belief that has shaken Mexico’s Mormon community.That’s why Langford, and much of his extended family, are leaving northwest Mexico. They’re part of a fundamentalist Mormon group that has lived in this area for decades before the drug cartels took over and the violence became inescapable.”It’s not worth living in fear,” he said. “The toughest part for me was saying goodbye … saying goodbye to two innocent lives that were cut short and a vibrant wife that lived a life to its fullest that had many friends and and was loved by all by everybody.” Copyright © 2019, ABC Audio. All rights reserved.

Scarlett Johansson and Colin Jost have tied the knot
Brothers Peter and Benjamin Bratt explain the inclusive conversation they want to have with the rerelease of ‘Follow Me Home’
See Queen Elizabeth II and Margaret Thatcher face off in ‘The Crown’ season 4 trailer
Coronavirus live updates: One boy likely responsible for over 100 cases at retreat: CDC
Jennifer Lopez reveals she almost wasn’t cast in ‘The Wedding Planner’
United to test all passengers for COVID-19 on select London flights