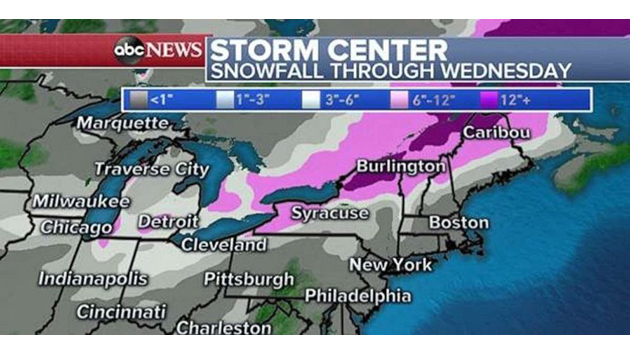 ABC News (NEW YORK) — Saturday was the end of the latest cold blast across much of the eastern U.S., however a more intense, much colder, record breaking cold blast that will impact more than half of the U.S. is on the way.A very cold air mass straight form the Arctic is currently en route to the central and eastern U.S. While the cold will begin to spill into parts of the central U.S. Sunday and Monday, the core of the cold will hit on Tuesday and Wednesday for the eastern two-thirds of the nation.This air mass is notable for November, with temperatures likely to be 20 to 30 degrees below average. Confidence is growing that likely hundreds of records will be broken on Tuesday and Wednesday, from Texas to Maine. This includes both daily record minimum temperatures and daily record minimum high temperatures. Also to note, that many of these records that are in danger this week are from the 1800’s.On Tuesday, nearly the entire Central U.S. will see wind chills in the teens and single digits. In the upper Midwest, wind chills will be below zero in spots. Then on Wednesday, this cold air will expand into the northeast where it will be just absolutely brutal for November standards with wind chills in the low teens and single digits for the entire Northeast U.S.This Arctic air lurks behind a couple of different weather systems that are sort of interacting with each other over the next couple days. Already, new winter storm alerts are being issued for parts of the U.S. this morning for a little bit of snow that will come with this blast of Arctic air.Near the Great lakes today, some Lake Effect snow will be possible, with possible light accumulations. However, a storm system will surge southward into the central U.S. today, with snow overspreading the northern Rockies.Some snow will develop late Sunday into Early Monday and stretch from Colorado all the way to Michigan. Snow likely gets into some major cities like Des Moines, Chicago and Milwaukee. Snow on Monday morning could cause slippery travel in the Chicago area on Monday morning.Then on Monday night, likely a wide swath of snow will stretch from Arkansas to Maine, with the heaviest into parts of Ohio, Kentucky, and Western New York.Then on Tuesday as the storm hits the east coast, likely rain will be changing to snow due to the Arctic air quickly moving in.The result of this is some snow from the Midwest to the East Coast. Only light accumulations, if any, are expected in the big Northeast cities from Philadelphia to Boston. Chicago and Milwaukee could also pick up a couple of inches. However, the bullseye for snow will be from northern Indiana to northern Vermont, especially in areas prone to lake effect enhanced snow. Locally 3 to 6 or more inches of snow will be possible through Wednesday.Elsewhere, a small brush fire broke out on Saturday in the Hollywood Hills. The Fire named the Barham fire spread to 34 acres and was quickly brought up to 15% containment.Thankfully, the fire did not really erupt because there is no significant wind. It is just the normal dry season in Los Angeles.However, the fire burned near Hollywood Studio lots and caused some dramatic scenes of fire and smoke near iconic parts of Hollywood.There will be some elevated concerns of Fire Danger in the Los Angeles area on Monday into early Tuesday, however, the forecast is not nearly as ominous as just a few weeks ago.Copyright © 2019, ABC Audio. All rights reserve