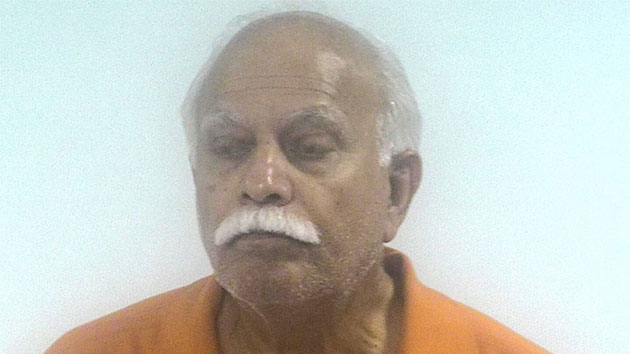 Western Tidewater Regional Jail(CHESAPEAKE, Va.) — Federal prosecutors have accused a Virginia doctor of performing surgeries on women — such as hysterectomies and removing their fallopian tubes without their consent according to court documents.Javaid Perwaiz, 69, faces several charges related to insurance fraud as a result of an investigation that began in September 2018 after the FBI received a tip from a hospital employee who suspected he was “performing unnecessary surgeries on unsuspecting patients,” according to the criminal complaint, filed Friday in the Eastern District of Virginia.The unidentified patients would advise hospital staff that they were there for their “annual clean outs” and were not aware of the procedures they were undergoing, the affidavit states. In addition, hospital staff “had a difficult time” keeping up with the doctor “as he ran from procedure to procedure,” charging documents say.Perwaiz has a practice in Chesapeake, where he lives, according to the court documents.A preliminary review of Medicaid claims from his patients revealed that certain patients were subjected to repeated surgical procedures, with some occurring on an annual basis, the affidavit states. From January 2014 to August 2018, Perwaiz allegedly performed surgery on 40% of his Medicaid beneficiaries, which amounted to 510 patients. About 42% of those patients underwent two or more surgeries, according to the court documents.The review also revealed that Perwaiz allegedly had a “propensity to conduct bundled surgeries,” involving laparoscopy, dilation and curettage, and lysis of adhesions, the affidavit states.On one patient, Perwaiz allegedly performed annual D and C surgeries based on a diagnosis of endometriosis, according to the court documents. On at least one occasion, she was scheduled for the procedure without having appeared for an office visit, and in 2011, Perwaiz allegedly treated her for an ectopic pregnancy.From 2011 to 2014, Perwaiz allegedly asked the patiently “routinely” whether she planned on having another baby, the affidavit states. In 2014, when the patient sought treatment from a fertility specialist, that doctor advised her that “both fallopian tubes were burnt down to nubs, making natural conception impossible.”The court documents alleges that Perwaiz removed that patient’s fallopian tubes without her consent or knowledge.In another case, in 2012, federal prosecutors say the patient thought only her ovaries would be removed but was “shocked” when she awoke from surgery to discover that Perwaiz allegedly performed a full hysterectomy, which he documented as an “elective surgery”on her medical record. That patient learned that there were less invasive procedures available when consulting with another doctor, according to the court documents.The last surgery listed in the court documents occurred on Oct. 19 of this year, in which Perwaiz allegedly performed an abdominal supracervical hysterectomy, bilateral salpingo-oophorectomy and lysis of adhesions on a patient who later told investigators that she “never made complaints” regarding pelvic pain, pelvic pressure or constant cramping, despite what was written in her medical chart on Sept. 30. The patient also stated that she told the doctor she did not want a hysterectomy, but he allegedly told her it was the “best option” and did not discuss other treatment options or the risk of surgery.Perwaiz’s medical practice submitted three claims to Blue Cross Blue Shield for that patient on Oct. 28 and was later reimbursed $942.22 for the partial hysterectomy, according to the affidavit.Federal prosecutors have charged Perwaiz with “executing a scheme” to defraud the Virginia Medical Assistance Program and Blue Cross Blue Shield by submitting false and fictitious claims from 2010 to about October of this year, according to the court documents. He is also be charged with making false and fictitious claims to Blue Cross Blue Shield for the patient he treated in October for providing her with medical care that “did not present with the symptoms listed” and that she did not need.Perwaiz was arrested Friday and was still being held at the Western Tidewater Regional Jail in Suffolk, Virginia, as of Sunday. His attorney, Lawrence H. Woodward Jr., did not immediately respond to ABC News’ request for comment.The affadavist lists other instances in where Perwaiz was under investigation related to his medical practice. In 1982, Perwaiz lost his hospital privileges at the Bon Secours Maryview Medical Center in Portsmouth, Virginia, “due to poor clinical judgment and for performing unnecessary surgeries” and had been invested by the Virginia Board of Medicine for performing surgeries, predominately hysterectomies, “without appropriate medical indications and contrary to sound judgment.”Perwaiz was ultimately censured for poor record keeping, according to the court documents.In 1996, Perwaiz pleaded guilty to two counts of tax evasion, and his medical license was temporarily revoked but later reinstated in 1998, the affidavit states. He has also been the subject of at least eight medical malpractice lawsuits, charging documents state, in which plaintiffs allege he “falsified patient records to justify a medical procedure, failed to use less invasive techniques, performed as many as 30 surgeries in one day, and provided substandard care that resulted in irreparable permanent injuries to three patients and life threatening injuries to another two patients.”He was still wearing green scrubs when he made his initial appearance at the U.S. District Court in Norfolk, where he was ordered to be held without bond, according to the newspaper. Copyright © 2019, ABC Audio. All rights reserved.

Teens fight book banning with their own banned book clubs