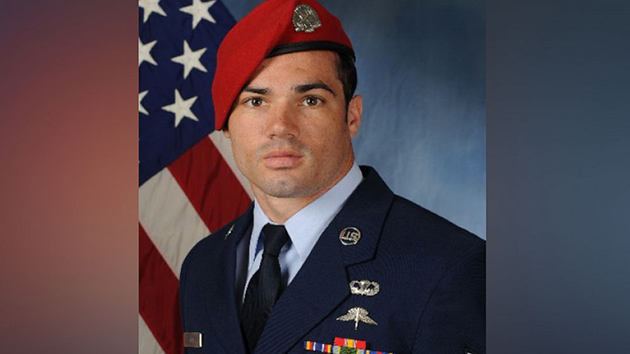 U.S. Air Force(NEW YORK) — The Air Force has identified the missing airman who fell out of a plane over the Gulf of Mexico during a training exercise as a 29-year-old Special Tactics combat controller.Staff Sgt. Cole Condiff fell from a C-130 aircraft on Tuesday during a parachute training exercise, according to the Air Force. His parachute was deployed, officials said.Condiff fell from the aircraft at about 1,500 feet and others in the plane saw him tread water after he landed, ABC News Pensacola affiliate WEAR reported. It was unclear what led to the fall.The Dallas native was with the Air Force’s 23rd Special Tactics Squadron, 24th Special Operations Wing and “was specially trained and equipped for immediate deployment into combat operations to conduct global access, precision strike, and personnel recovery operations,” according to his biography.His roles included static-line jumpmaster, military free-fall jumper, combat scuba diver, air traffic controller and a joint terminal attack controller.After enlisting in the Air Force in 2012, Condiff completed deployments to Africa and Afghanistan, according to the Air Force. He was promoted to staff sergeant in December 2017 and was received the Air Force Commendation Medal with a combat device and Air Force Achievement Medal.The U.S. Coast Guard announced Saturday that the search for Condiff had been suspended and the Air Force has taken the lead in the efforts to recover his body.Condiff is survived by his wife and their two daughters as well as his parents, sister and two brothers, according to the Air Force.The Air Force described him as a “devoted family man” who was “focused on teaching his girls to be adventurous like he was.””Cole was a man with deep-rooted beliefs who dedicated himself to God, our freedoms, peace, and his family,” U.S. Air Force Lt. Col. Steven Cooper, commander of the 23rd STS, said in a statement.”This is a tragic loss to the squadron, the Special Tactics community and our nation. Our thoughts and prayers are with his family, friends and teammates at this time.”Copyright © 2019, ABC Audio. All rights reserve

Biden visits Puerto Rico after Fiona, commits to recovery ‘as long as it takes’