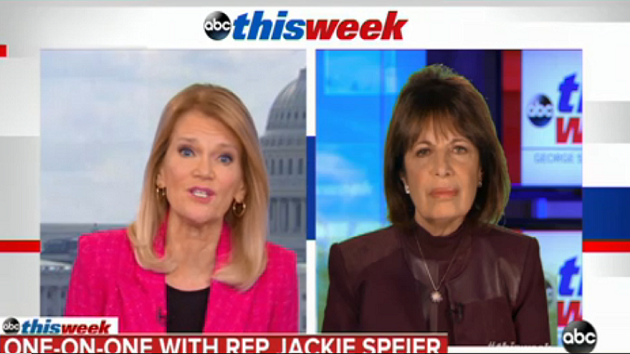 ABC News (WASHINGTON) — A Democratic and a Republican lawmaker looked ahead to the first televised hearings in the impeachment probe and responded on Sunday to the Republican witness requests in interviews on ABC’s “This Week.””This is a very simple, straightforward act. The president broke the law,” said Rep. Jackie Speier, D-Calif, a member of the House Intelligence Committee which will conduct this week’s public hearings. “He went on a telephone call with the president of Ukraine and said ‘I have a favor though’ and then proceeded to ask for an investigation of his rival. This is a very strong case of bribery.””The Constitution is very clear — treason, bribery or acts of omission,” she added. “And in this case it’s clearly one of those.”Ranking member of the House Armed Services Committee, Rep. Mac Thornberry, R-Texas, criticized the inquiry for being partisan, in response to Speier during a separate interview on “This Week.””I think whatever happens now, there will be a taint to this one-sided partisan approach to impeachment, that is different that has been used before, and so I think there will be intense skepticism about whatever they come up with,” he said.When “This Week” co-anchor Martha Raddatz pressed Thornberry on the substance of the allegations at the center of the impeachment inquiry versus the process, Thornberry said, “I believe that it is inappropriate for a president to ask a foreign leader to investigate a political rival.”He added, however, “I do not believe it was impeachable.”Thornberry further defended the Republicans’ focus on process over substance in the impeachment inquiry.”There’s a reason we let murderers and robbers and rapists go free when their due process rights have been violated,” he said. “We believe the integrity of the system, the integrity of the Constitution, the integrity of the processes under our legal system, is more important than the outcome of one particular case.”When asked why he thought President Donald Trump’s actions were not an abuse of power, the Texas Republican pointed to the president’s public statements on these issues.”There’s not anything that the president said in that phone call that’s different than he says in public all the time,” Thornberry said. “So, is there some sort of abuse of power that rises to that threshold that is different than the American people have been hearing for three years? I don’t hear that.”Public hearings in the impeachment inquiry begin on Wednesday, with testimony from Ambassador Bill Taylor and Deputy Assistant Secretary of State George Kent scheduled.House Republicans released their request for witnesses on Saturday, including Hunter Biden, the son of former Vice President Joe Biden, an individual referred to as “the anonymous whistleblower,” senior diplomat Kurt Volker, Tim Morrison, the senior director for Europe and Russia on the White House National Security Council, and Under Secretary of State for Political Affairs David Hale.House Intelligence Committee Chairman Rep. Adam Schiff responded to Republicans in a letter saying that the committee was evaluating the witness list, but said that the impeachment inquiry would not “serve as vehicles for any Member to carry out the same sham investigations into the Bidens or debunked conspiracies about the 2016 U.S. election interference that President Trump pressed Ukraine to conduct for his personal political benefit.”He also called the original whistleblower’s testimony “redundant and unnecessary” and said that an appearance would put the whistleblower’s personal safety at risk.On “This Week,” Speier echoed Schiff’s comments and said the focus needs to stay on the president’s conversation.”We want to stay focused on the Ukraine call,” she said.”And having Hunter Biden come in is unrelated to the Ukraine call. And so that becomes irrelevant,” she added.Thornberry criticized the timing of the inquiry, accusing Democrats of rushing the process so that impeachment does not interfere with early presidential primary challenges.”Put everything they’ve got out there, fine,” Thornberry said. “Let the American people decide this in less than a year.”Copyright © 2019, ABC Audio. All rights reserve