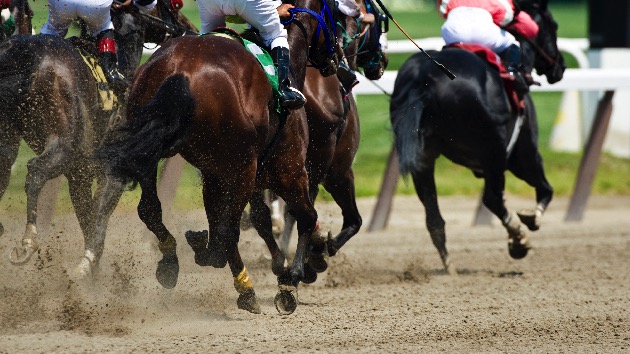 cmannphoto/iStock(DEL MAR, Calif.) — Two horses died and another was injured in the same racing day at the Del Mar Thoroughbred Club in Southern California.The first thoroughbred, Ghost Street, suffered a catastrophic injury to its left front sesamoid during the third race of the day on the turf course, according to the track. The horse was then “humanely euthanized.”

We are sad to confirm that in today’s third race on the turf course Ghost Street suffered a catastrophic injury to his left front sesamoid and was humanely euthanized.We are deeply sorry for owner Aaron Sones, trainer Patrick Gallagher, his staff and everyone who cared for him.

Ghost Street was a 3-year-old gelding, ABC San Diego affiliate KGTV reported.Another thoroughbred, Prayer Warrior, was also euthanized after it was injured during the sixth race on the main track, according to the track, but the details of the injury were not released.Zoe Metz, a member of the family that owned Prayer Warrior, wrote on Twitter that the horse was “loved by everyone.””The barn will definitely not be the same without him,” she wrote.

It’s with a heavy heart to say that we unfortunately lost Prayer Warrior this afternoon. He was loved by everyone. The barn will definitely not be the same without him. Thank you to everyone for reaching out. ? pic.twitter.com/9Wadcwnr3f

The horse that was injured, Princess Dorian, suffered an injury to her left front leg during the second race on the main track and was transported to the San Luis Rey Equine hospital for further care, according to the track.The incidents happened within 90 minutes of each other, The San Diego Union-Tribune reported.Before Sunday, which was Del Mar’s third day of the fall meet, the track had not seen a single death in 2019, unlike 115 miles north in Santa Anita Park, where 37 horses died since December.After the last death occurred during the Breeder’s Cup, Sen. Dianne Feinstein, D-Calif., called for increased transparency at racetracks to ensure the safety of horses, as well as for racing to be suspended at Santa Anita.The track did not immediately respond to ABC News’ request for comment.”Safety is everything here,” Joe Harper, CEO of the Del Mar Thoroughbred Club told KGTV on Friday.Copyright © 2019, ABC Audio. All rights reserved.