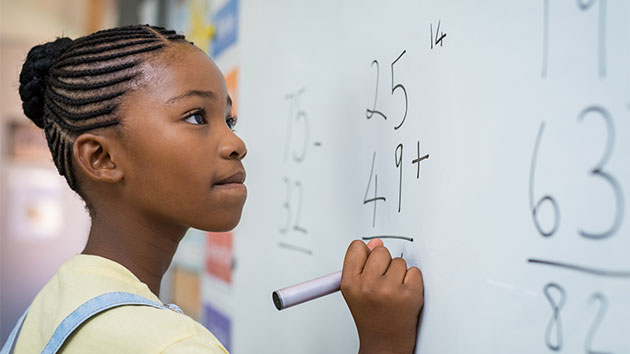 Ridofranz/iStock(NEW YORK) — As more and more advocates and organizations work to dispel the myths that boys are better at math than girls or that women don’t belong in STEM fields, new data is supporting their case.Boys and girls show the same brain activity when it comes to math, according to a new study published Friday in the journal Science of Learning.The seven-year study, conducted in Rochester, New York, tested the brain activity of more than 100 children ages three to 10.The children underwent functional MRI scans while watching 15 to 20-minute long clips of educational TV shows like “Sesame Street” that focused on basic math processing.The three female co-authors of the study examined the kids’ brain activity to look for things like how active was their brain over the course of the clip and at what points during the clip did their brain activity peak.The result is one the co-authors hope will put an end to the lingering assumption that boys are better than girls at math.”What we found is that there weren’t any differences in how children’s brains were working when they were watching the math videos,” one of the co-authors, Alyssa Kersey, Ph.D., a post-doctoral research scholar at the University of Chicago, told “Good Morning America.” “It allowed us to see that girls’ brain activity and boys’ brain activity is the same when it comes to math.”Kersey points out that while there has been behavioral research showing boys and girls perform the same on math, this new research is the first to find their brain activity is the same, too.”It’s a new way to show these differences aren’t there,” she said. “There doesn’t seem to be a biological difference at this early age.”Studying kids while they were just watching educational videos gave the researchers data on kids’ brain activity around math when they were not feeling pressure to perform correctly, according to Kersey. There may be additional research to do on whether there are differences in brain activity between girls and boys when there is pressure to perform.”There is definitely work showing that anxiety affects performance so if there is more anxiety among girls, that could affect performance,” she explained.Kersey added she hopes the reaction to the study is swift in breaking down any lasting stereotypes around women and STEM.”It’s important for parents and teachers to know about these results and to see there is the same potential for girls and boys to excel at math and so girls and boys should be given the same opportunities at home and at school to excel,” she said. “I’ve been in this field for a while now but it’s nice to do work that you feel like has the potential to produce some sort of change more quickly.”Copyright © 2019, ABC Audio. All rights reserved.