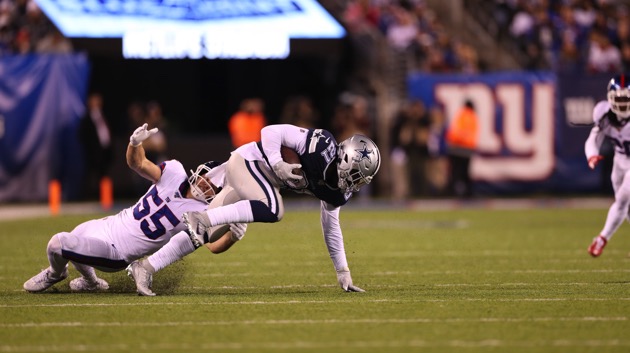 Allen Kee / ESPN Images(DALLAS) — The Dallas Cowboys have added an internet celebrity to its starting lineup.Yesterday, “America’s team” announced the NFL’s black cat as a starter during the Sunday night game versus the Minnesota Vikings.The feline famously stormed the field during the Cowboys versus New York Giants game last week at MetLife Stadium, much to the delight of the crowd and now the internet.

The Cowboys tweeted the announcement Sunday with a video revealing the starting lineup. The video ends with a picture of the team’s “MVP Rally Cat” with a graphic of the Cowboys star in its eyes.The cat also sports the No. 9 jersey in a nod to the creature’s numerous lives as well as to the jersey number of former Cowboys quarterback Tony Romo.

Both fans and players alike appear to support the animal. Linebacker Jaylon Smith rolled into the AT&T stadium before the game wearing a custom “Black Cat” t-shirt, plugging the de facto mascot.Unfortunately for the Cowboys, even the black cat’s luck — and ability to outrun state troopers — wasn’t enough this time. The Vikings won 28-24.Copyright © 2019, ABC Audio. All rights reserved.