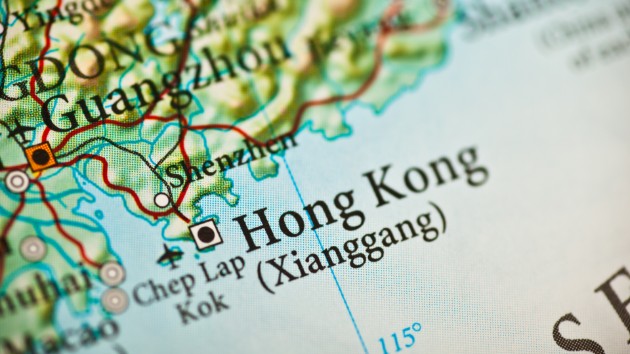 pawel.gaul/iStock(HONG KONG) — A 21-year old protester was shot by police with a live round and a pro-China man was set on fire as Hong Kong woke up Monday to chaos on its streets.Protesters, answering an online call, attempted to disrupt the Monday morning commute all across the city with what they dubbed as “Operation Dawn.” Groups of protesters fanned out across the city setting up blockades and vandalizing subways stations and intersections.The death of a university student last week from a fall has reignited rage in the protest movement. The protesters believe that the police bear responsibility for the student’s injury because he fell off a parking garage in the vicinity of a police clearance operation.After a relatively subdued weekend, the protesters chose to escalate their actions by disrupting Monday rush hour to force a general strike.Just before 8 a.m. in the residential district of San Wai Ho, a squad of traffic police officers were captured on an online livestream attempting to clear the small blockade put up by protesters when one of the officers was approached by black-clad students.The cop pulls out his service revolver and tackles one of the protesters while another unarmed protester approaches and attempts to reach for the revolver.A shot then rings out. The officer shoots the protester in the abdomen before firing off another two rounds that police later confirmed did not hit anyone else.At a police press conference later that day, Hong Kong Police spokesperson Tse Chun-chung said, “at that time, the officer believed it was very likely that the revolver would be snatched and the consequences would be disastrous.”The protester who was shot, a 21-year-old student at the Institute of Vocational Educational, was then seen on the livestream in a puddle of blood, body limp with blood draining from his face, his eyes wide open. This excerpt has been circulating Monday morning across multiple social media platforms.As the livestream continued, the protester can be seen waking up and attempting to escape before being subdued again by police. He was then taken to Hong Kong’s Pamela Youde Nerthersole Eastern Hospital where he is currently in the stable condition after coming out of surgery.The police shooting, the third known since these protests began in early June, caused clashes to erupt in numerous districts across the city including in the heart of Hong Kong’s central business district at the height of lunch time.Riot police fired tear gas into a crowd that included protesters and office workers which then sent them running for cover into high-end shopping centers.Stand offs also sprung up at numerous universities across the city including Hong Kong University, Hong Kong Polytechnic University and the Chinese University of Hong Kong. Protesters ignited barricades at both PolyU and CUHK during their confrontation with police.Violence has escalated as tempers have flared on both sides as the Hong Kong protests enter their sixth month. There has been a steady escalation of tactics by protesters and police. What began as a protest against a now-shelved extradition bill has morphed into a pro-democracy movement marred by anti-government and police sentiments with those involved more willing to engage in targeted violence. Meanwhile the police have seemingly lowered the threshold to engage with the protesters.A couple of other videos also emerged on Monday morning of a police motorcycle appearing to deliberately drive into a group of protesters. Police later confirmed that the officer has been suspended from active duty and the incident is under investigation.Protesters have also resorted to violence to settle disputes. In multiple graphic videos, a protester douses a man with an unknown fluid and sets him alight. The man was in the midst of an argument with the protestors and had earlier tousled with them as they were vandalizing the Ma On Shan MTR rail station. Police said that man is now in critical condition.At a press conference, protesters called on Hong Kong people to stage “a massive strike, to be carried out indefinitely” in response to Monday’s shooting and to continue to pressure the government to meet their demands which including an independent probe into police actions as well as restarting political reforms towards true democracy.Hong Kong’s leader Carrie Lam condemned the violence Monday evening.“If there is any wishful thinking that by escalating violence that Hong Kong SAR government will yield to pressure to satisfy the so-called political demands, I am making this statement clear and loud here … that will not happen,” Lam said speaking to the media. “Violence is not going to give us any solution to the problems that Hong Kong is facing. Our joint priority now is to end the violence and to return Hong Kong to normal as soon as possible.”

Russia-Ukraine live updates: Russia is running out of missiles