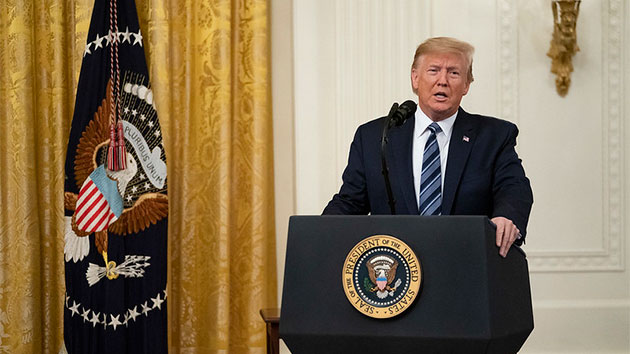 Official White House Photo by Tia Dufour(WASHINGTON) — Attorneys for the House Democrats and the former deputy national security adviser, have jointly filed with a federal judge saying acting chief of staff Mick Mulvaney should not be able to join an ongoing lawsuit filed last month.

The original lawsuit, filed by Dr. Charles Kupperman was in response to a subpoena he received from House Democrats seeking his testimony in the ongoing impeachment inquiry into President Donald Trump regarding Ukraine.

Kupperman was subpoenaed by House Democrats on Oct. 25, that subpoena has since been withdrawn. The House asked the judge to dismiss Kupperman’s case on Wednesday after they withdrew their subpoena for Kupperman’s testimony, arguing that the case was obsolete without the subpoena.

In their filing on Monday, Democrats argue “this case is moot … (and) the subpoena to Kupperman, which provides the sole basis for the injury he asserts in his complaint, has been withdrawn.” Therefore, Mulvaney should not be allowed to intervene. Democrats add that Mulvaney’s intervention should be thrown out even if the “case were not moot.” Democrats claim that “Mulvaney is differently situated from Kupperman in several important respects that make clear that he lacks a cognizable interest in Kupperman’s case.”

On the other hand, Kupperman’s attorney, Charles Cooper, also agrues Mulvaney should not be able to join the suit but for different reasoning. Cooper in his filing argues that Kupperman is neutral, and note Mulvaney is not, writing in part, “Mulvaney has made it clear that he supports the Executive, and he accordingly seeks declaratory relief against only the House Defendants.”

Attorneys also point out that Kupperman is no longer part of the administration, unlike Mulvaney.

Kupperman filed a case shortly after he was subpoenaed asking a judge to decide whether he must submit to questioning in the House impeachment inquiry.

The case is the latest twist in White House efforts to block all former and current administration officials from testifying or otherwise cooperating with the Democrat-led probe.

The White House had maintained that Kupperman is entitled to what it calls constitutional immunity, arguing, “Congress may not constitutionally compel the president’s senior advisers to testify about their official duties” due to the separation of powers between the executive and legislative branches.