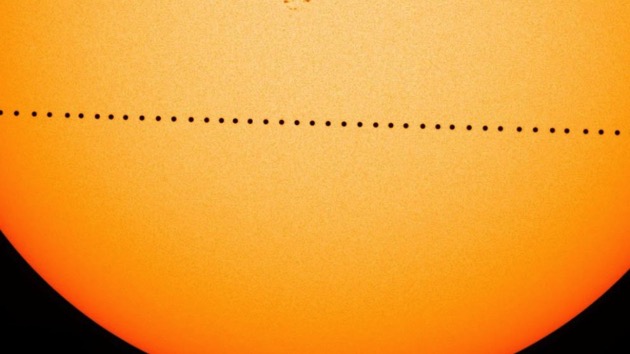 NASA(NEW YORK) — Mercury will pass in front of the sun on Monday, appearing as a dark spot moving across the star’s bright surface.The cosmic event, which is called a transit, will last for roughly 5.5 hours and started at 7:35 a.m. ET.Unlike a solar eclipse, you can’t see Mercury’s transit with the naked eye. But stargazers have to take precautions.NASA recommends heading to a local astronomy club to use a “specialized, properly-filtered solar telescope.””You cannot use a regular telescope or binoculars in conjunction with solar viewing glasses,” according to NASA.

Good morning, Sunshine! ☀️Today, Mercury will pass between the Earth & the Sun, silhouetting it against our home star. This passage will begin at approximately 7:35am ET and last for more than five hours. Here's how you can watch the #MercuryTransit: https://t.co/ZPf6Kf98Pa pic.twitter.com/xnE9QdNuMu

Mercury in transit is a major event, and a rare one. We won’t be able to see the transit again until 2032.If you can’t make it to your local astronomy club, NASA’s Solar Dynamics Observatory will be posting close-up images of the transit, and Slooh is livestreaming the event.Copyright © 2019, ABC Audio. All rights reserved.