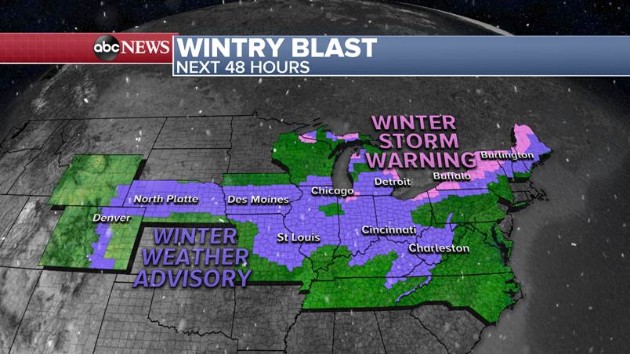 ABC News(NEW YORK) — Snow has cancelled nearly 1,200 flights in Chicago Monday and more than 1,500 nationwide as those from the Midwest to the South to the Northeast brace for a major temperature plunge.

A quick-moving storm has brought accumulating snow to the Midwest and the Rockies, transforming highways into sheets of ice and sending cars veering off roads.

One plane in Chicago even slid off the runway due to icy conditions while landing at O’Hare International Airport Monday morning, American Airlines said. No one was hurt, according to the airline.

Winter weather advisories & warnings from New Mexico & Colorado into New England. This means snow! Some spots 2-6”, others (in pink) will get lake enhanced 6-12”!!!Raise your hand if you are excited for this hit of snow ? pic.twitter.com/mom5ITnQWV

This is the snowiest start to winter in Milwaukee and Madison by “virtue of number of days with measurable snowfall,” according to the National Weather Service.

As this arctic cold takes aim, 16 states from Oklahoma to Maine are under winter storm warnings or winter weather advisories.

On Monday night, the snow will stretch from Arkansas through Indianapolis to Detroit, Buffalo and even northern New England, bringing a dangerous evening commute.

The heaviest snow will hit the Great Lakes region and interior Northeast, where up to 1 foot of snow is expected. But in areas with the most persistent lake effect snow bands, 14 to 20 inches of snow is not out of the question.

By Tuesday morning, the storm will reach the Northeast and the East Coast — and New Yorkers may get their first glimpse of snow this season.

Heavy rain will move from Atlanta through Raleigh, and that rain is forecast to change to a snowy mix in Washington, D.C., New York and Boston. However, the storm is fast-moving, so no snow accumulation is expected in those cities, but a brief blast of snow is possible.

Behind the storm system is an arctic front that is set to bring a major cold blast.

The coldest morning for the Midwest will be Tuesday. The wind chill, or what it feels like, is forecast to reach -5 degrees in Chicago, -2 degrees in Indianapolis, 7 degrees in Nashville and even 13 degrees in Dallas.

The coldest morning for the East Coast will be Wednesday. The wind chill is expected to reach 8 degrees in Boston, 15 degrees in Pittsburgh, 19 degrees in Atlanta and 23 degrees in Birmingham.

Click here for tips on how to stay safe in the cold.