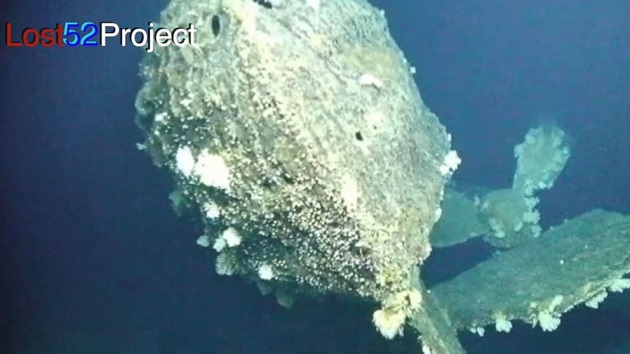 Courtesy Lost52 Project(NEW YORK) — A team of ocean explorers discovered the likely resting place of 80 U.S. sailors presumed dead when one of the most successful American submarines of World War II sank after leaving Pearl Harbor more than 75 years ago.Private explorers found the USS Grayback about 1,400 feet below the ocean surface, off the coast of Japan, ending a decades-old mystery and bringing closure to relatives of those who went down with the ship. Gloria Hurney, who lost her uncle Raymond Parks, an electrician’s mate, first class, and Kathy Taylor, who lost her uncle and Godfather John Patrick King, an electrician’s mate, third class, were among the first to find out about the discovery.”I committed from the very beginning, from a little girl, that I was gonna find him or follow him or keep his memory alive, whatever I could do,” Taylor told ABC News in an interview. “I thought it was probably blown to pieces. That’s what I thought. And obviously it’s not.”The Grayback, credited with sinking 14 enemy ships, was discovered south of Okinawa with much of its body still in tact. Its plaque was still affixed to the front, but there was evidence that the sub likely was bombed.Undersea explorers Tim Taylor and his wife Christine Dennison discovered the warship back in June and spent months searching for relatives of its crew who perished. Together, they’ve set out to find the wrecks of every American submarine lost in the war, an effort they dubbed the Lost 52 Project. So far, they’ve found five of 52 subs.

“We do not tell people that we’re looking for these because we don’t want to disappoint people, and we don’t want to blast it across the internet until it’s done properly through the Navy,” Taylor told ABC News. “With the technology that we’re using, and the ability to cover large swaths of ground, we’re looking at the potential to find several more.”Researchers recently discovered a flaw in the translation of Japanese war records that misrepresented the spot where the Grayback may have sank.”The numbers that came out were wrong, and that’s how we found it,” Taylor said. “It was mistranslated after post-WWII, and they changed one number — an 8 to a 6 — and our Japanese translator re-translated it, found it, put us 100 miles to a different area.”Dennison said the most important part of their work is about bringing closure to the families of those who died.”It’s very vital that we remember them, and that they feel that they haven’t been forgotten, that their sacrifice wasn’t in vain,” Dennison said. “We are grateful for their sacrifices, and we will never forget our veterans. The most important thing is, they’re here, now they can be celebrated again, they can be honored again, and we know where they are.”