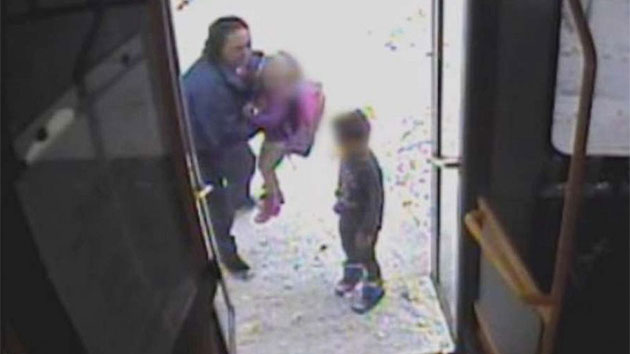 Waukesha Metro Transit(WAUKESHA, Wis.) — It was a frigid Monday morning in Waukesha, Wisconsin — only 18 degrees with snow on the ground — when bus driver Nicole Chamberlain passed two children wandering along the road.“The little girl only had on a t-shirt and diaper and neither of them had a coat on,” Chamberlain told ABC affiliate WISN. “They were headed toward a busy intersection and I knew there was no school bus stop down there, or school, so I knew right away I had to pull over and help them.”After Chamberlain pulled over, she stepped out of the bus, called the children over and asked them “what’s going on?”“They said, ‘We’re looking for grandma,’” Chamberlain told WISN. “I said, ‘Come with me, I’m gonna put you on the warm bus and I’ll help you find grandma.’”She picked the 2-year-old girl up and ushered the girl’s 6-year-old brother onto the bus, then called the police.A camera on the bus caught Chamberlain shedding her coat to help cover the toddler’s bare legs.Within minutes, the children’s grateful grandma arrived at the bus and explained to police that while she was in the basement, the boy went outside and his sister followed.Police said both children are uninjured and they are not recommending any charges.“If that were to happen to my children,” Chamberlain said, “I would hope that there would be somebody — a decent human being — that would stop and help my kids.” Copyright © 2019, ABC Radio. All rights reserved.

The Electoral College: How presidents are elected
Health official tears up delivering latest COVID-19 numbers in emotional briefing
Rising infections in Idaho highlight the virus’ latest target: Rural America
Man apologizes as he’s sentenced to life in prison for Mackenzie Lueck slaying
‘Boogaloo Bois’ member charged in attack on Minneapolis police building during George Floyd protests
Wunmi Mosaku would “run for the hills” if she were actually in her Netflix horror movie ‘His House’