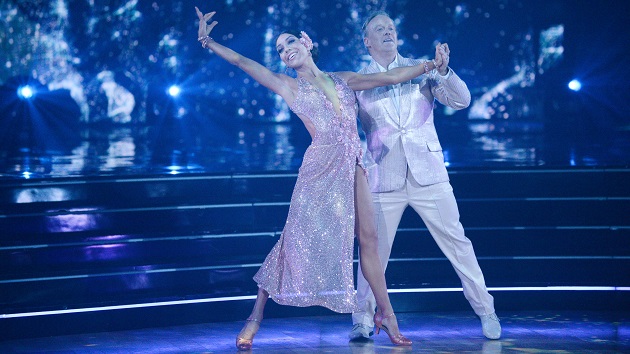 ABC/Eric McCandless(NEW YORK) — With the semifinals so tantalizingly close, Dancing with the Stars’ final six competitors pulled all the stops on the dance floor after two consecutive nights of shocking eliminations.  With two dance routines to master, the tension was palpable as the contestants used every trick at their disposal to survive for another week.

However, the shocking eliminations may be over as Sean Spicer, the competitor who consistently earned the lowest scores of the season while simultaneously dodging the bottom two, was finally handed his marching orders by judges Carrie Ann Inaba and Bruno Tonioli.  Both opted to spare country star Lauren Alaina, who was sent to the bottom two for the first time on Monday.

Spicer’s DWTS journey went out with a whimper as he scored a full 20 points lower than the rest of the pack.  His Argentine tango and foxtrot earned tepid remarks from the judges, even from the effervescent guest judge Joey Fatone, who awarded him a combined final score of 50/80.

In an unexpected surprise, Spicer earned the Presidential Seal of Approval on Monday as President Donald Trump tweeted his congratulations, saying he was proud of his former press secretary and that Spicer gave it “a great try.”

On the flip side, the night saw a historic double perfect score, secured by Ally Brooke.  The former Fifth Harmony singer, who was nearly sent home last week, poured everything she had onto the dance floor and even pulled a few jaw-dropping tricks with partner Sasha Farber.  During their intensely vivacious jazz routine to New Kids on the Block’s “Step By Step,” Sasha lifted Ally as she kicked over his head before spinning in place.

Her expressive samba to “Wannabe” by the Spice Girls also earned rave reviews from the judges.  At the end of the night, Judge Bruno declared Ally reminded him of dance icon Paula Abdul.  The high praise combined with the high risks on the dance floor paid off, as it was announced Ally and Sasha were the first couple going through to the semifinals with their perfect final score of 80/80.

There was another dancer who earned a perfect score on Monday, comedian Kel Mitchell and partner Witney Carson.  While their Paso Doble to En Vogue’s “Free Your Mind” fell flat with the judges, Kel came back with an extremely romantic Viennese waltz to Boys II Men’s “I’ll Make Love to You.”

Judge Carrie Ann was delighted that Kel took the critique he received from his Paso Doble and implemented it into his waltz.  “I love a man who can take direction,” she joked before she, along with the three other judges, held up a 10.  Mitchell’s final score of the night was 74/80.

For a second night in a row, Bachelorette star Hannah Brown was held back from achieving her first perfect score — once again by Judge Len Goodman.  The judge broke from the others and handed her a nine for her striking tango to BTS’ “Boy With Luv.”  Despite the disappointment, Judge Bruno bolstered the reality star’s confidence by comparing her to Hollywood greats Ava Gardner and Rita Hayworth.

Finally, the most memorable moment of the night did not come from one of the competitors, but from past contestant… guest judge Joey Fatone.  The season four runner-up ripped his pants during the opening number when jumping off the stage in a split.

Unfortunately for him, the hilarious wardrobe malfunction was caught front and center on camera — no thanks to host Tom Bergeron who encouraged the audience to rewind and play back the embarrassing moment.  The former NSYNC member, luckily, didn’t seem too mortified and played along.

Dancing with the Stars returns next Monday, November 18, at 8 p.m. ET on ABC.  Next week is the semifinals and, already, some details have emerged regarding the season finale, which takes place in two weeks.  It was revealed that superstar Cher will help close out season 28.