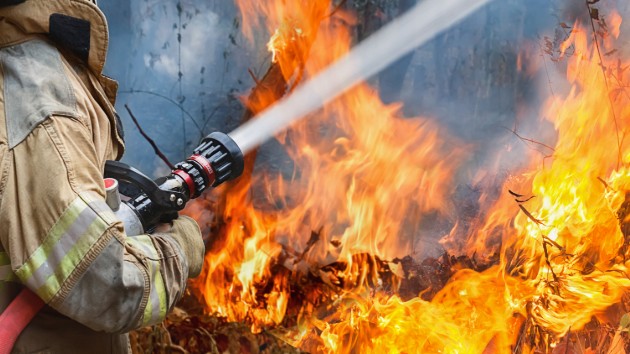 Toa55/iStock(NEW YORK) — As Australia’s most populous state declared a state of emergency due to unprecedented wildfire danger, firefighters who saved a man’s house from the flames left him a note in which they apologized for drinking his milk.After returning to his New South Wales home, Paul Sekfy said that he found a note signed by the Urunga Rural Fire Service (RFS).He shared a photo of the short message on Facebook, where it has been shared thousands of times.

“It was a pleasure to save your house. Sorry we could not save your sheds. P.S. – we owe you some milk,” the firefighters’ handwritten communication said.The recipient described it as the “best note on my kitchen bench since the morning after my wedding.”Residents have been facing what “could be the most dangerous bushfire week this nation has ever seen,” New South Wales state Emergency Services Minister David Elliott said.The fireman who claims to have been behind the note eventually responded to Paul Sekfy’s social media post.

“We took refuge in your house for a moment and that’s when we discovered the fridge,” Kale Hardie-Porter commented on Facebook.Fires in the state’s northeast have claimed three lives, destroyed more than 150 homes and razed more than 3,800 square miles since Friday.Having already apologized for drinking the homeowner’s milk and being unable to save his sheds despite heroic efforts, the firefighter went on to explain his “shocking handwriting,” saying “it was late and couldn’t see a thing!”More than 100 people have been treated by doctors and paramedics for fire-related injuries, including 20 firefighters, Ambulance Commissioner Dominic Morgan said.Wishing Sekfy well for the future, Hardie-Porter described it as a pleasure “to do a little good in such horrendous conditions.” Copyright © 2019, ABC Audio. All rights reserved.

Biden says, again, that US would defend Taiwan from Chinese invasion

US now urges away outside help while negotiating for Griner, Whelan’s release from Russia