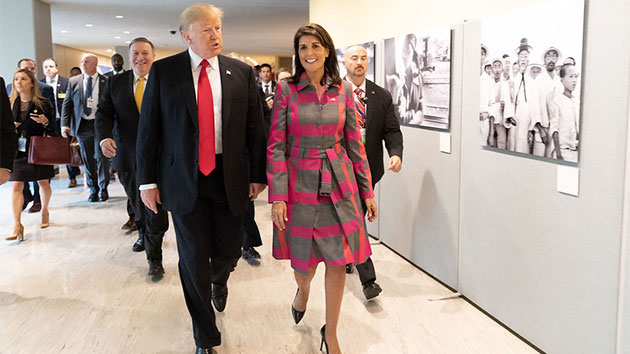 Official White House Photo by Shealah Craighead(WASHINGTON) — Former Secretary of State Rex Tillerson and former White House chief of staff John Kelly are pushing back against former U.S. ambassador to the United Nations Nikki Haley’s claims that they attempted to persuade her to join them in undermining President Donald Trump.In her book “With All Due Respect,” officially released on Tuesday, Haley said she was summoned to Kelly’s office for a two-hour long meeting where the pair expressed their discontent with several of the president’s policy decisions. “Kelly and Tillerson confided in me that when they resisted the president, they weren’t being insubordinate, they were trying to save the country,” Haley said in her book. “Tillerson went on to tell me the reason he resisted the president’s decisions was because, if he didn’t, people would die.”During an interview with NBC’s “Today” show on Tuesday, Haley cited the Trump administration’s move of the U.S. embassy in Israel and pulling out of the Iran nuclear deal as two policy decisions the men disagreed with and sought to overturn.”This wasn’t that they thought there was a rogue president in the White House, this was the fact that they disagreed with him on policy,” Haley wrote. “They didn’t think we needed to move the embassy from Tel Aviv to Jerusalem, they didn’t think we need to get out of the Iran deal.”In a statement to the press on Monday, Tillerson denied allegations that he wanted to undermine Trump in any way, claiming Haley was not as close to the president as she suggested.”During my service to our country as the Secretary of State, at no time did I, nor to my direct knowledge did anyone else serving along with me, take any actions to undermine the President,” Tillerson said. “Ambassador Haley was rarely a participant in my many meetings and is not in a position to know what I may or may not have said to the President.”While Kelly hasn’t released an official statement, The Washington Post reported comments he made regarding the allegation.”If providing the President with the best and most open legal advice from across the government so he can make an informed decision is ‘working against Trump’, then guilty as charged,” Kelly said Monday.Late Sunday, the president himself went to Twitter and urged the public to read Haley’s book.

.@NikkiHaley is out with a new book, “With All Due Respect” this week. Make sure you order your copy today, or stop by one of her book tour stops to get a copy and say hello. Good luck Nikki! https://t.co/uHKAAlVuLt

Unlike the upcoming book by “Anonymous”, and several administration officials who have been testifying in the impeachment inquiry, Haley’s book has nothing but positive things to say about the president.Haley, who resigned from the UN in October 2018, well before the events that led to the impeachment inquiry, has expressed her opinion on the inquiry.”I think it’s never a good practice for us to ask a foreign country to investigate an American, it’s just not a good practice,” Haley said on “Today.” “Having said that, there’s no insistence on that call, there are no demands on that call, it is a conversation between two presidents that’s casual in nature and you know it’s just hard to find anywhere that the president of Ukraine would’ve thought funds were being held and he had to do this.” Copyright © 2019, ABC Radio. All rights reserved.