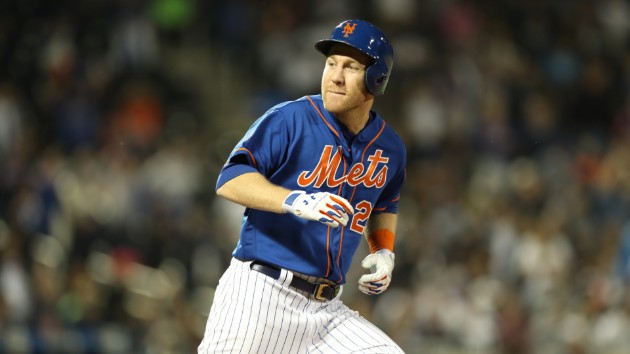 Allen Kee / ESPN Images(NEW YORK) — It’s almost Thanksgiving, but before turkeys end up on the menu, they’re apparently fighting back.At least that’s what a gaggle of wild turkeys are doing in the New Jersey town of Toms River. And homeowners are saying that they’re pretty aggressive.”We have them on our roof; they’re pecking at our roof, our brand new vehicles, they’re pecking at our vehicles,” Donna Scala, a resident of Toms River, told New York ABC station WABC-TV. In some social media posts on Twitter, bands of wild turkeys can be seen taking over the quiet streets and terrorizing the suburban neighborhood as if it was the scene of a horror film.But one resident in particular has had enough and is calling for action.”We need all the help we can get to get these animals out of here and put them in a safer place,” MLB veteran Todd Frazier, who shared a photo of the birds on his car, said on Twitter.

The New Jersey resident took to Twitter over the weekend to vent about the issue and said it happens every year.In one post, Frazier shares that the turkeys are a huge problem in his town and they’ve even come close to harming his kids.”We actually got attacked by them a year ago. I have three young kids and that’s basically all I’m worried about and that’s basically all our neighborhood is worried about,” he said.

I have seen the reports about wild turkeys 🦃 in Toms River. They are a big problem here I. Toms River and the Toms River wildlife say they can’t move them. That’s ridiculous. They have come close to harming my family and friends, ruined my cars, trashed my yard and much more…

Frazier, who is a free agent after playing with the New York Mets last season, said he tried calling animal control to take care of the issue, but there isn’t a whole lot they can do.”It’s nuisance wildlife — we are not licensed to trap, relocate or as they use the word, harass, the turkeys or any wildlife, for that matter, that’s a nuisance,” Richard Barbosa, from Toms River Animal Control, told WABC.This isn’t the first time that wild turkeys have taken over.Two years ago, a group of wild turkeys ruffled a few feathers in the Northern California city of Martinez.And last year, the same thing happened in Longwood, Florida, where wild turkeys wreaked havoc and pecked at cars.In all cases, the birds were considered “nuisance wildlife” and could only be removed with a special permit.While there isn’t really much that can be done to get rid of the turkeys, residents like Frazier are pleading for help.”For wildlife to say they’re not trained or they can’t do anything about it, that doesn’t make sense to me,” he said.