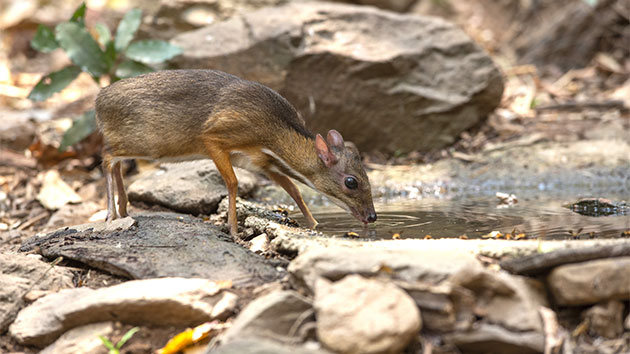 BirdHunter591/iStock(NEW YORK) — Scientists have rediscovered a deer-like species in southern Vietnam more than 25 years after it was last recorded. A camera trap captured images of the silver-backed chevrotain, also known as the Vietnamese mouse-deer, after it was “lost to science” since 1990, the Global Wildlife Conservation announced on Tuesday.The deer-like species is about the size of a rabbit, but is neither a mice nor deer, according to the conservation. Rather, it is the world’s smallest ungulate, or hoofed mammal.Although there are 10 known species of chevrotain in the world, primarily in Asia, the silver-back is distinguished by its silver sheen. They are typically shy and solitary, appear to walk on the tips of their hooves and have two tiny fangs, according to the conservation.Researchers set up three camera traps after interviewing several local villagers and government forest rangers who reported seeing the animal, which resulted in 275 photos of the elusive species.The team later set up another 29 cameras, which recorded 1,881 images in five months.An Nguyen, associate conservation scientist and the expedition’s team leader, said researchers were “surprised and overjoyed” when they checked the camera.”For so long this species has seemingly only existed as part of our imagination,” she said in a statement. “Discovering that it is, indeed, still out there, is the first step in ensuring we don’t lose it again, and we’re moving quickly now to figure out how best to protect it.”Researchers are now looking to determine how large and stable the population is.The findings of the rediscovery was published this week in the scientific journal Nature Ecology & Evolution.Copyright © 2019, ABC Radio. All rights reserved.

Americans among 8 injured in bus shooting in Jerusalem