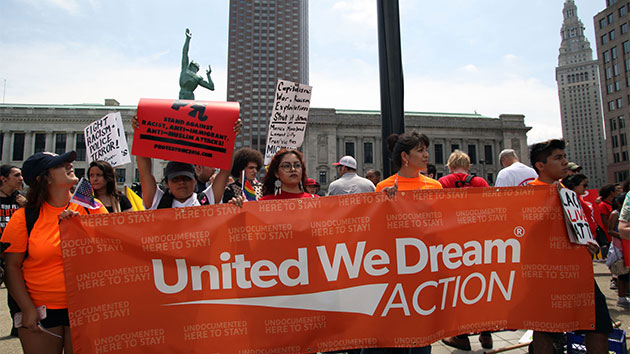 vichinterlang/iStock(NEW YORK) — A divided Supreme Court on Tuesday grappled with the rationale behind President Donald Trump’s decision to end protections for 700,000 young immigrants and the subsequent consequences for their families, communities and employers. All of the court’s Republican-appointed justices seemed to agree that the Trump administration has the authority to cancel Deferred Action for Childhood Arrivals, or DACA, which President Barack Obama created in 2012 to provide temporary legal status and work permits to immigrants. “This was a serious decision. We all agree with that,” said Justice Brett Kavanaugh. “We can agree or disagree with the merits of it.”At issue in the case is whether the Trump administration followed federal law requiring agencies to base policy changes on sound reasoning that is explained to the public. Lower courts ruled that the decision to end DACA was “arbitrary and capricious” in violation of law.Tuesday, the court’s conservative members seemed inclined to overturn.Justice Neil Gorsuch, acknowledging “sympathetic facts” that “speak to all of us” in the case of DACA, suggested the government had in fact provided adequate justification to begin with.”What more would you have the government say?” a skeptical Gorsuch asked Ted Olson, the attorney defending DACA. “If it’s a failure of adequacy of explaining, what more is left to be said?”In September 2017, then-acting Homeland Security Secretary Elaine Duke released a memo ending the DACA program for a single reason: that the policy was unlawful and unconstitutional. Nine months later, with court challenges underway, Duke’s successor Secretary Kirstjen Nielson elaborated on the decision in an additional memo that also called DACA bad policy.”Nielsen’s memo encompasses all,” said Trump Solicitor General Noel Francisco. The cancellation of DACA “simply ended the previous non-enforcement policy” towards certain undocumented immigrants.But some justices suggested the administration needed to provide additional justification — and a more detailed accounting of likely impacts of ending DACA — before the change could take effect.Justice Sonia Sotomayor delivered a lengthy, impassioned defense of DACA — at times seeming to draw disapproving glances from Chief Justice John Roberts — singling out the president for sending mixed messages.”There’s a whole lot of reliance interests that weren’t looked at,” Sotomayor said, “including the current president telling DACA-eligible people that they were safe under him and that he would find a way to keep them here. And so he hasn’t and, instead, he’s done this.”Justice Stephen Breyer hinted that the court may try to seek a middle ground, ultimately siding with the administration but crafting an opinion that buys time for policymakers to address DACA recipients’ status.Breyer suggested there could be “good reason for holding the status quo,” temporarily, to ensure concerns raised by hundreds of businesses, universities, churches and law enforcement groups in separate filings with the court can be considered.”We hold the status quo, and we go back now and we look if there are reasons beyond the contemporaneous reason, which is the Duke memo,” Breyer posited.The court’s decision, expected by the end of June, will come in the heat of the 2020 presidential campaign.Trump, who in the past has vowed to accommodate DACA recipients, on Tuesday tweeted that he believes their status can be part of a broader immigration deal with Democrats.”If Supreme Court remedies with overturn, a deal will be made with Dems for them to stay!” Trump tweeted.Oral arguments in the case drew a packed courtroom and thousands of demonstrators on the plaza outside the court. Dozens of people camped out in the cold for days for a chance to attend the hearing. Copyright © 2019, ABC Radio. All rights reserved.