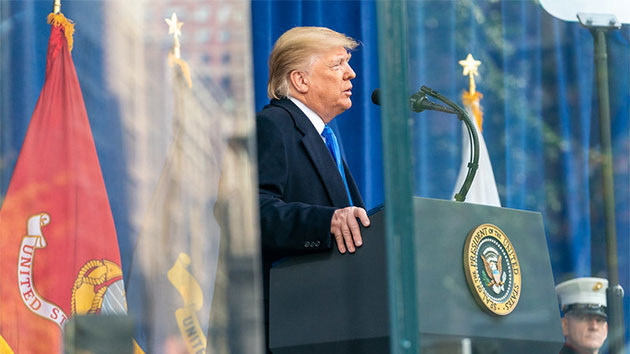 Official White House Photo by Shealah Craighead(WASHINGTON) — A year out from Election Day, President Donald Trump’s re-election campaign is beefing up its already sizable communications team and war room as the campaign also prepares to combat public impeachment hearings starting this week. The campaign, which has steadily added staff throughout the year both on the political and press side, is again adding veteran experience to the team while its attention continues to be split between campaigning for the president and pushing back against impeachment.The moves include the campaign elevating Erin Perrine to principal deputy communications director after initially joining back in April as deputy communications director. Perrine, a Capitol Hill veteran, moved over to the campaign after most recently serving as national press secretary for House Republican Leader Kevin McCarty of California.Perrine will now take a more senior role on the road with the campaign both managing press logistics for major surrogate events and rallies, while continuing to serve as a spokesperson.Ali Pardo is also joining the campaign as deputy director of communications for press. Like Perrine, Pardo joins with years of Capitol Hill experience including serving as the National Press Secretary for the House Republican Conference under Chairwoman Liz Cheney.Pardo also previously worked for both Rep. Ann Wagner and Senator Marco Rubio, managing the Hispanic and regional media for the Republican National Committee during the 2014 and 2016 election cycles. She also served as the Press Secretary for President Trump’s Inaugural Committee after the 2016 election.The latest hire continues the campaign’s habit of recruiting experienced Hill veterans, a persistent distinction from the more insurgent 2016 Trump campaign which, especially early on, was largely staffed with political outsiders.“Team Trump keeps getting stronger. Erin Perrine’s talents have been invaluable to the President’s re-election campaign and she will contribute even more in her new role,” Tim Murtaugh, Trump campaign communications director said in a statement to ABC News. “Ali Pardo will make an excellent addition to the team with her years of experience on Capitol Hill, with Republican leadership, and with the President’s Inaugural Committee.”In addition to the communication team moves the campaign has made recently, they’ve also staffed up the war room team to a total of 16, adding to the seemingly ever growing roster of digital attack dogs, a campaign official confirmed to ABC News. The campaign war room will continue to work alongside the RNC and White House counter messaging teams and has played a key role in pushing anti-impeachment messaging.Since House Speaker Nancy Pelosi announced the impeachment inquiry in late September, the Trump campaign has pulled double duty—both working to ensure the reelection of the president while on the front lines pushing back against a barrage of news surrounding the impeachment proceeding.“It’s a balancing act for us,” Senior Trump campaign adviser Lara Trump told ABC News in late October. “We obviously are going to continue to push back on impeachment until it no longer exists. We think it’s completely unfair and there’s no due process being offered to this president whatsoever. So, we are in uncharted territory, however you look at it, but certainly for us, you know we always want to focus on [the president’s] accomplishments.”But the reelection team says they’ve been able to turn the impeachment push into serious campaign cash—telling ABC News they raised $15 million, and received 50,000 new donations, in the 72 hours after the impeachment inquiry was announced.This week, House Democrats enter the public hearing phase of the impeachment inquiry with Americans split essentially even on impeaching the president and removing him from office, but Trump’s approval rating remains low at 38% in the latest ABC News/Washington Post poll.On whether Congress should impeach Trump and remove him from office, the public is divided 49% to 47%. But support for impeaching and removing Bill Clinton was lower, from 27% to 41% in ABC/Washington Post polls in 1998, with consistent majorities, 57% to 71%, opposed. Copyright © 2019, ABC Radio. All rights reserved.